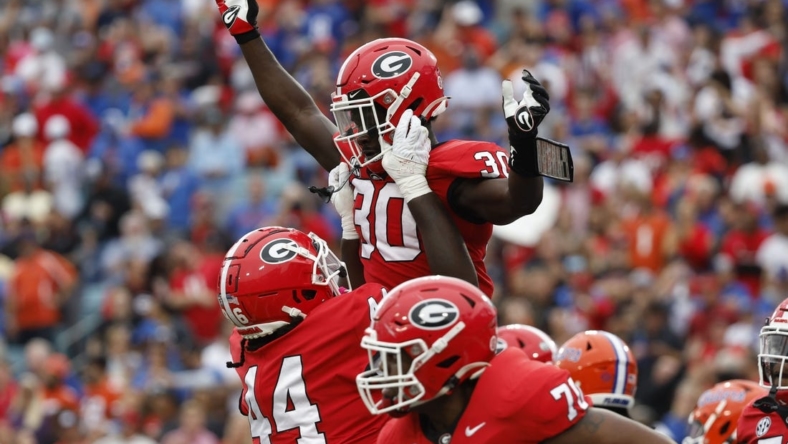 Daijun Edwards and Kenny McIntosh each ran for two scores and Stetson Bennett added two touchdowns passes as top-ranked Georgia pulled away for a 42-20 win over Florida in the Southeastern Conference rivals’ annual clash in Jacksonville, Fla.

Bennett went 19-for-38 passing for 316 yards with two interceptions, with tight end Brock Bowers finishing with five catches for 154 yards, including a 73-yard touchdown.

Ladd McConkey had four catches for 51 yards, including a 7-yard touchdown.

Florida quarterback Anthony Richardson went 18-for-37 passing for 271 yards with a touchdown and no interceptions.

Xzavier Henderson had five catches for 110 yards, including a 78-yard touchdown, while Trevor Etienne had 11 carries for 53 yards and a touchdown.

Etienne’s 3-yard run with 9:34 left in the third quarter and Adam Mihalek’s 26-yard field goal a little more than three minutes later following a Bulldogs’ fumble cut the lead to 28-13.

After Bennett’s second interception, Richardson threw a 78-yard scoring strike to Henderson down the sideline to trim the lead to 28-20 with 3:31 left in the third quarter.

But that’s as close as the Gators would get, as Edwards’ 22-yard touchdown run pushed the lead to 35-20 with 35 seconds left in the third quarter.

Georgia outgained Florida 555-371 and held the Gators to 4-for-16 on third-down conversions, while the Bulldogs went 6-for-12 and averaged 7.1 yards per play overall.

In the first half, Georgia outgained Florida 346-88, holding the Gators to just 13 rushing yards and two first downs.