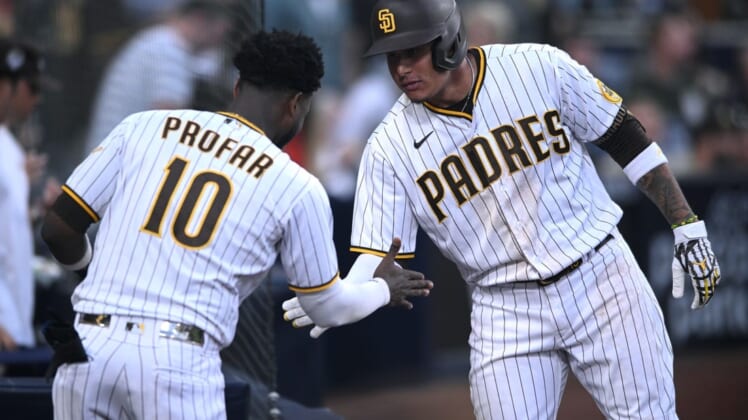 Right-hander Joe Musgrove worked six scoreless innings to run his record to 7-0 while lowering his best-in-the-majors ERA to 1.50, and Jake Cronenworth, Manny Machado and Jurickson Profar continued their strong hitting Friday night as the Padres defeated the visiting Colorado Rockies 7-0.

The Padres won for the sixth time in seven games and have out-scored the opposition 29-2 on 35 hits over the past three games. Friday night was also the Padres’ eighth shutout of the season.

Musgrove held the Rockies to four hits and two walks while striking out eight in his 11th straight quality start to open the 2022 season. The Padres are 10-1 this season when Musgrove starts.

Machado hit his 10th homer of the season in the third inning off Colorado starter and loser Chad Kuhl (4-3). Cronenworth had a two-run double in the fourth and a third RBI on a ground out. And Profar had an RBI triple in the seventh.

Cronenworth has 17 RBIs in his last six games, going 9-for-22 with three doubles and three homers. Profar has at least one RBI in seven straight games and is 12-for-28 during the run with two doubles, a triple and a home run with 10 RBIs and 11 runs scored. Machado has three doubles, two homers and eight RBIs in the last seven games.

The Padres took a 2-0 lead in the second on the first of three singles by Nomar Mazara, an RBI double by Trent Grisham and a run-scoring single by Austin Nola. Machado made it 3-0 with his 10th homer in the third. Cronenworth’s two-run double an inning later made it 5-0.

The Padres upped the score to 7-0 in the sixth on RBI doubles by Luke Voit and Ha-Seong Kim, who also finished with three hits. The final two San Diego runs came in the seventh on Profar’s RBI triple and Cronenworth’s grounder to first.