The Chicago Bulls are reportedly willing to include big man Nikola Vucevic in a trade package for Utah Jazz center Rudy Gobert. Working under the mindset that such a report is true, one figures the Bulls will at least listen to trade offers for Vucevic this offseason.

The 31-year-old Vucevic is one of the more versatile big men in the NBA. He scores in the post, hits the boards at a high level and has a reputable mid-range and three-point jump shot.

3. Nikola Vucevic to the Utah Jazz

As previously alluded to, the Bulls and Jazz could be trade partners this offseason. That’s because there’s a deal to be made, but an effective trade can be completed beyond the mere inclusions of Gobert and Vucevic.

It’s time for Utah to take some chances. Quin Snyder stepped down as head coach, which came after the team failed to advance past the first round of the Western Conference Playoffs. Getting new offensive weapons around Donovan Mitchell is of the essence. Vucevic fits the bill.

Vucevic adds a new dimension to Utah’s offense in his ability to interchangeably score inside and outside. Such an ability bodes well in both halfcourt sets and in the fastbreak. The big man adds offensive vibrancy and someone to stretch the floor, which Gobert doesn’t do.

Utah can send Chicago Gobert and Alexander-Walker for Vucevic and White. The Jazz get a shakeup in the paint and a starting-caliber guard while the Bulls shore up their interior defense and get a wing scorer.

All that said, the Jazz may prefer to make a more simplistic trade, as opposed to acquiring Vucevic and having to make subsequent moves in their backcourt (they acquire White in this scenario).

The Trail Blazers have all the resources needed to devise a playoff team this offseason. Acquiring Vucevic would be a tremendous step towards accomplishing that aim.

Damian Lillard is one of the elite scorers in the NBA. Anfernee Simons displayed the ability to be a vital source of offense after CJ McCollum was traded. Josh Hart is a scrappy two-way player. When healthy, Nassir Little has flashed starting potential. The Trail Blazers need a frontcourt scorer and/or high-level interior presence. Vucevic emphatically fills that void.

With Lillard and Simons attacking the rack, Vucevic can step out behind the three-point line for clean perimeter looks. When the game slows down in crunch time, Vucevic can go to work in the paint. He provides Portland with a precise offensive skill-set that doesn’t exist in its rotation. The big man also comes with experience in postseason play.

Portland can send Chicago Bledsoe, who the Bulls can reroute for an asset, the No. 7 and 59 picks in the draft and a future first-rounder for Vucevic and the No. 18 pick. The Trail Blazers move back in the draft and maintain their $20-plus million in cap space while the Bulls draft an immediate starter and replenish some of the draft capital used to initially acquire Vucevic.

The factor that could stop the Trail Blazers from pursuing Vucevic, though, is them preferring to use their trade chips on a high-octane forward and sign veteran centers on the cheap.

1. Nikola Vucevic to the Charlotte Hornets

The Hornets have a boatload of talent but nothing to show for it thus far. They’ve been bounced out of the NBA Play-in Tournament as the 10th seed in each of the last two seasons. Charlotte needs to make a move, and Vucevic is a worthwhile investment for its sake.

LaMelo Ball and Terry Rozier are legitimate scoring options and in the former’s case has star upside. Miles Bridges has become a force to be reckoned with off the dribble. This is a scoring trio the Hornets should be enthused by, but another piece is needed. That is where Vucevic enters the picture. 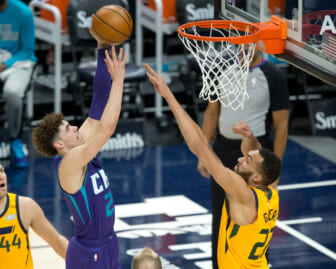 The big man gives Charlotte an inside presence who makes a tangible difference on the offensive end. Vucevic’s outside shooting would be a plausible fit in an offense that has been hoisting up three-pointers like nobody’s business of late.

Meanwhile, Vucevic can get the Hornets points in the paint, a skill set lacking from their bigs over the last two years. His presence also gives the Hornets someone who can bang in the paint with the likes of Joel Embiid, Bam Adebayo and Pascal Siakam in postseason play.

Charlotte can send Chicago the No. 13 pick, Oubre and Plumlee for Vucevic and a future second-rounder. The Hornets get an immense upgrade in the paint while the Bulls get three rotation pieces for a player on an expiring contract.