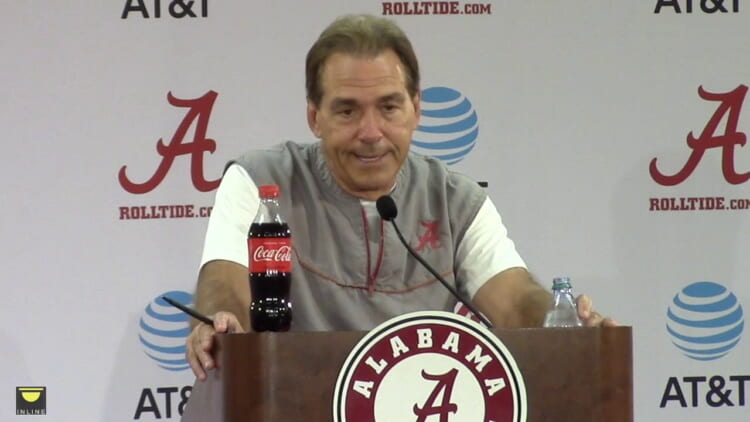 Nick Saban has an interesting way of getting points across to his Alabama football players sometimes, and we’re about to share one of them right now.

Speaking with the media Wednesday ahead of the upcoming Texas A&M game, Saban was asked if he had any specific plans involving players who hail from the Houston area, which is where Hurricane Harvey went through in August.

Saban said he hadn’t even really thought about it, noting “maybe that’s a mistake on our part,” but saying they are treating it like a business trip.

“It’s kind of like my dad used to tell me when I used to go to work at the station, my girlfriend broke up with so I was treating the customers bad,” Saban said, per Michael Casagrande of AL.com. “He said ‘What’s wrong with you today?’ I said ‘My girlfriend broke up with me.’ He said ‘Well, you’ve got one problem, but if you keep treating the customers bad you’re going to have two more. I’m going to fire you and then I’m going to whip your ass for getting fired.

Essentially, what he said it means is that the team has already done what it can — Alabama athletics did send a loaded 18-wheeler full of supplies. But if they are stuck dwelling on what happened and what still needs to happen in lieu of the hurricane, then they’ll lose two ways.

Saban has been approaching the upcoming Texas A&M game with laser-like focus. Despite the fact that ‘Bama has dispatched its last two opponents by a combined score of 125-3, he’s approaching the upcoming game as if it’s the national championship. He recently said Texas A&M is “the strongest team that we’ve played to this point all the way around.”

Whether that’s hyperbole of he really believes it, you can be sure Saban isn’t going to let his team veer off track, no matter what else is going on.