Nick Foles favored to start for Chicago Bears this season? 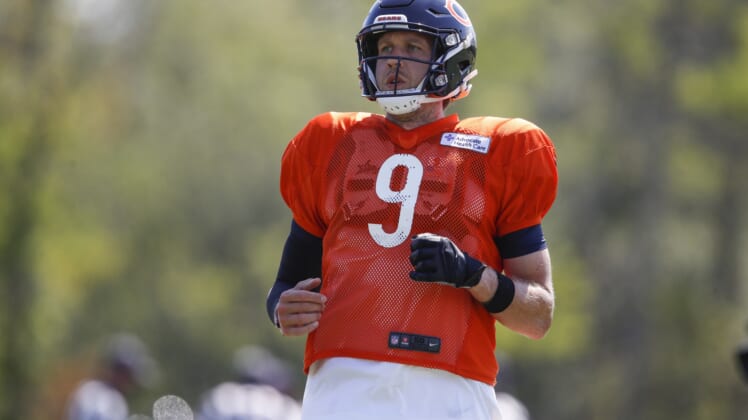 The Chicago Bears acquired Nick Foles this offseason hoped he would light a spark under starting quarterback Mitch Trubisky. Instead, with the NFL season just two weeks away, Foles appears on the verge of taking the starting job.

While the Bears publicly backed Trubisky during the offseason, their actions showed the coaching staff wasn’t sold on him as the starter. With training camp nearly wrapped up, those concerns are proving to have some merit.

Who will start at quarterback for Chicago Bears this season?

Both players came into training camp with the disadvantage of not having minicamps and OTAs to practice with their teammates and start the quarterback competition early. However, Chicago made sure both signal-callers received plenty of first-team reps in practice, in part to make up for the loss of preseason games.

The reports out of training camp haven’t exactly been glowing for either quarterback. According to NBC Sports’ Adam Hoge, Foles was “generally accurate: in a recent practice, but isn’t taking many shots down the field. Meanwhile, Trubisky has shown inconsistent accuracy and isn’t making the most of his opportunity.

Trubisky, the No. 2 pick in the 2017 NFL Draft, would seemingly have the advantage given his status and the team’s investment in him. However, with the Bears’ 2020 schedule set to begin on Sept. 13, Foles currently has the edge.

“Bears still believe Mitch Trubisky is getting better, but the buzz is growing a bit that Nick Foles has the slight upper hand right now,” Jeremy Fowler said on SportsCenter, via 247 Sports. “Next week will be huge for this battle, but Foles’ experience is starting to show up a little bit, a little more accurate. Trubisky’s had some problems with accuracy, but he has played pretty well over the past month, so Trubisky is still in it. So we’ll see what happens this week.”

It’s not exactly the situation Chicago hoped to be in at this point, especially with starting running back David Montgomery sidelined. Foles is a capable starter with a Super Bowl ring, but he struggled in 2019 with a 74.6 quarterback rating and lost his job to Gardner Minshew.

We’ll likely see Foles under center when the Bears take the field in Week 1. Given his limited upside as a starter, it wouldn’t be a surprise if the Bears alternate between both quarterbacks early in the season.