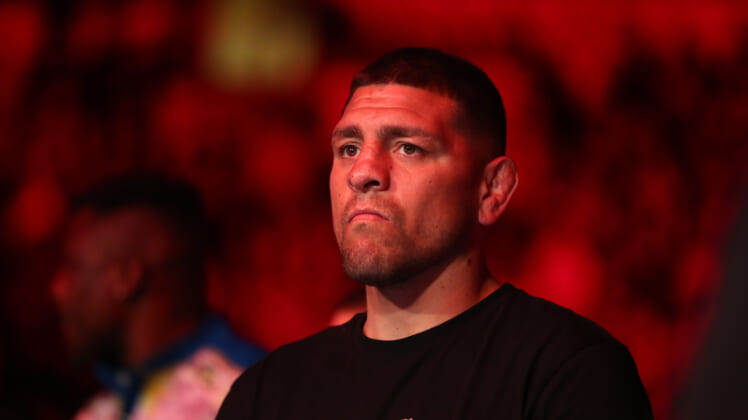 UFC and MMA great Nick Diaz is not interested in working his way up to a UFC title fight and would prefer an automatic championship opportunity against welterweight king Kamaru Usman when he returns to the Octagon later this year.

One-time Strikeforce 170-pound champion Nick Diaz is a very unique guy. Despite being one of the toughest and meanest competitors in cage fighting history, he has indicated on many occasions that he doesn’t love the sport.

However, even with his disinterest at times in competing, he is always campaigning to fight for championships. Even when he is completely undeserving of such hard-earned opportunities. It was the stance he had when he made his long-awaited comeback to the UFC last year after over six years due to a marijuana suspension and — you guessed it — a lack of desire to return.

Nick Diaz calls for a UFC title fight next

Before he missed weight for a planned 170-pound rematch against Robbie Lawler at UFC 266 in Sept., Diaz was open about his preference to face the current UFC welterweight champion. Despite a poor performance last year, where he looked every bit of a weathered MMA veteran, the Californian is still stumping for a title fight even though he hasn’t had a UFC victory since 2011.

While at a fan event, the 38-year-old spoke with TMZ Sports and was asked if he had to choose, would he rather fight boxing superstar Canelo Alvarez or Usman, and he admitted he prefers “The Nigerian Nightmare.” He also made it clear that while observers of the sport believe he should work his way up to the bout, it makes more sense to make it right away. Since he isn’t getting any younger and doesn’t want to risk taking a loss to a rising star he isn’t motivated to fight.

“I’d rather fight for a title. If I’m gonna fight, I’m wanna fight for the title. And that’s the thing, they wanna say I [should] fight a bunch of guys and stuff like that, well you know what, it’s a bigger fight if you just skip all the mess,” Diaz said. “I don’t need to go in there and get my a** whooped by one of them younger guys anyway. You know what I mean? And it’s not that I won’t win, I’m just not motivated to fight somebody [else] … I wanna fight for the title. I don’t want to do all this other stuff. I’m 38-years-old.”

The 21-year MMA veteran also said he hopes to get a return booking for later this year, and if given the chance he adamantly believes he could beat Usman by submission or knockout.