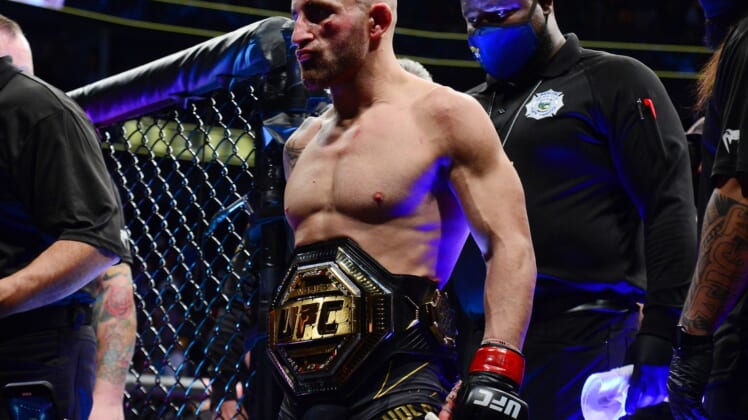 The UFC featherweight champion out of Australia was nearly submitted twice during the third round of his UFC 266 main event against challenger Brian Ortega of Torrance, Calif. But after escaping the second of two chokes, Volkanovski (23-1) delivered a hellacious beating, with Ortega (15-2) saved by the horn.

Ortega’s unreal toughness enabled him to go the distance in the 5-round fight, but Volkanovski retained his title in a Fight of the Year candidate at T-Mobile Arena in Las Vegas.

The judges scores were 49-46, 50-45, 50-44 for a unanimous decision. It was Volkanovski’s second successful title defense and his 20th consecutive victory.

The evening’s co-feature bout was the latest chapter in what is turning into the next dominant UFC title reign.

Women’s flyweight champion Valentina Shevchenko (22-3) of Kyrgyzstan toyed with Houston’s Lauren Murphy (15-5) for three rounds before turning up the heat and finishing things in the fourth. A right hand dropped Murphy, then a ground onslaught finished things off at the 4:00 mark. The win marked Shevchenko’s sixth successful title defense.

“I’m ready for anyone, I am the champion,” Shevchenko said.

While the title fights took top billing, the night’s most anticipated bout was a rematch 17 years in the making between fan favorite Nick Diaz (26-10) of Stockton, Calif., and former UFC welterweight champion Robbie Lawler.

Diaz delivered one of the most memorable knockouts in MMA history at UFC 47 in 2004. Saturday night, in a middleweight matchup, Lawler (29-15) wore down Diaz, who was fighting for the first time since 2015. A right hook was the telling blow as Lawler won via TKO at 0:44 of the third round.

“I always had respect for Diaz, he brings it every frickin’ time,” Lawler said.