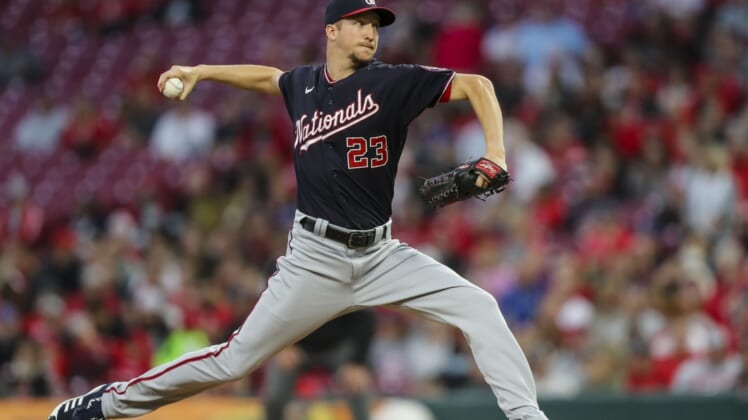 Nick Castellanos hit a walk-off solo homer with one out in the ninth inning and the Cincinnati Reds defeated the visiting Washington Nationals 7-6 on Saturday night.

Castellanos, who went 2-for-3 with three RBIs, hit an 0-1 fastball from Patrick Murphy (0-3) to center field for his 31st home run.

Mychal Givens (4-3) pitched one inning for the win.

Lane Thomas and Keibert Ruiz homered for the Nationals.

Cincinnati’s Joey Votto (left knee soreness) was out of the lineup.

The Nationals jumped out to a 1-0 lead in the first when Juan Soto walked with two outs, Josh Bell singled and Luis Garcia doubled, scoring Soto.

Tyler Stephenson led off the Cincinnati second with a single and Kyle Farmer doubled. They both scored on Eugenio Suarez’s ground-rule double to give the Reds a 2-1 lead.

Alcides Escobar singled to open the Nationals third and Soto walked, and Escobar scored on Bell’s single. Soto was out trying to steal third, but Ruiz and Jordy Mercer walked to load the bases. Tony Santillan replaced Gutierrez, but Andrew Stevenson lined a single to center, scoring Bell and Ruiz to make it 4-2.

Jonathan India led off the bottom of the inning with a ground-rule double and later scored on Castellanos’ sacrifice fly.

Thomas homered leading off the fourth to push the lead to 5-3.

The Reds loaded the bases with no outs in the fifth and settled for two runs. One run scored on Max Schrock’s sacrifice fly. After Delino DeShields was caught trying to steal third, Castellanos singled to right, scoring India with the tying run.

Ruiz’s second homer in two games gave the Nationals a 6-5 lead in the top of the seventh, but Farmer’s double in the bottom half scored Castellano to make it 6-6.