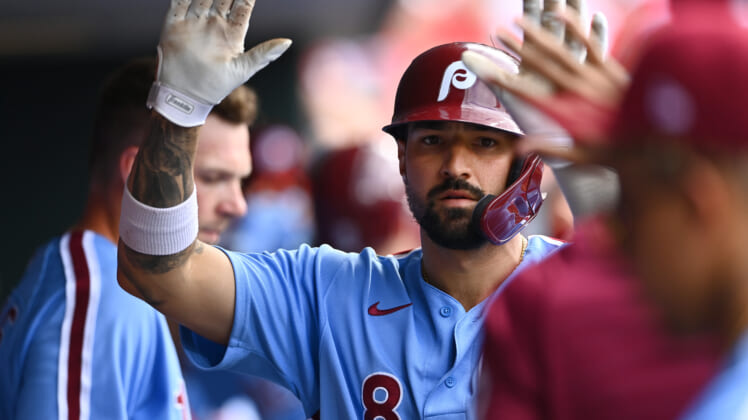 While many successes can happen every day, baseball is largely a game of failure. Nobody gets on base more than 50% of their plate appearances, which means players step up to the plate knowing their most likely outcome will end up a fail. But that won’t stop players like Nick Castellanos from persisting anyway, living for the 30% chance they reach base.

Nick Castellanos has been in the MLB for 10 years, is 30 years old, and has NOT lost his hearing, despite what some may think. More on that in a bit.

He’s an All-Star player who’s won a Silver Slugger — clearly a good ballplayer. It’s why the Philadelphia Phillies were willing to sign the outfielder to a five-year, $100 million contract this past offseason.

Only, Castellanos has struggled at the plate in his first season in Philly. His hitting splits are down across the board, and he’s particularly been struggling with strikeouts (24.7% SO rate). Obviously, Castellanos is fully aware of his slump.

The most recent frustration came on Saturday night, with Castellanos hitting third in the lineup against the Chicago Cubs. Both teams’ bats were napping until the top of the 10th, when the Cubs broke out with a five-run inning to steal the game 6-2.

But the Phillies had a chance in the bottom of the eighth inning after pinch-hitter Matt Vierling came through with a double to get into scoring position with no outs. It came to be that he advanced to third, with Castellanos coming to the plate with two outs, and a chance to send the Phillies ahead 2-1. Unfortunately, his struggles continued, and he struck out swinging to end his day going 0-4 at the plate.

As you can imagine, the fans in Philly were booing Castellanos for not coming through in the clutch after what’s been a long season for everyone. But booing is a fairly common activity, and for those playing, or more accurately, struggling in Philly, hearing upset fans in the stands is nothing new.

Reporter gets under Castellanos’ skin post-game

The biggest storyline from the game actually came from a post-game press conference, when reporters were given a chance to speak to Castellanos after another disappointing loss, Philadelphia’s second in a row since the All-Star break.

One reporter asked Castellanos if he could hear the fans at Citizens Bank booing him after he struck out.

Castellanos: “No man, I lost my hearing.”

Reporter: “So you didn’t hear him?”

He then asks the other reporters if anyone else can answer why it’s a stupid question before turning back to the reporter, reiterating his feelings about the question. Standing his ground, the reporter got defensive with Castellanos before a Phillies team official steps in and ends the interview.

Here’s the full exchange, with all its awkwardness.

While reporters have the right to ask ‘tough’ questions, there’s no need to essentially demand an answer. Find another way to pose the question, or perhaps a more eloquent way.

Of course Castellanos will be a bit heated. He’s coming off another tough loss, where he personally struggled and felt like he could have done better. It’s not hard to understand why Castellanos went off on the reporter. Yeah, the media member’s also right, Castellanos should be able to handle a stupid question, and he did just fine.