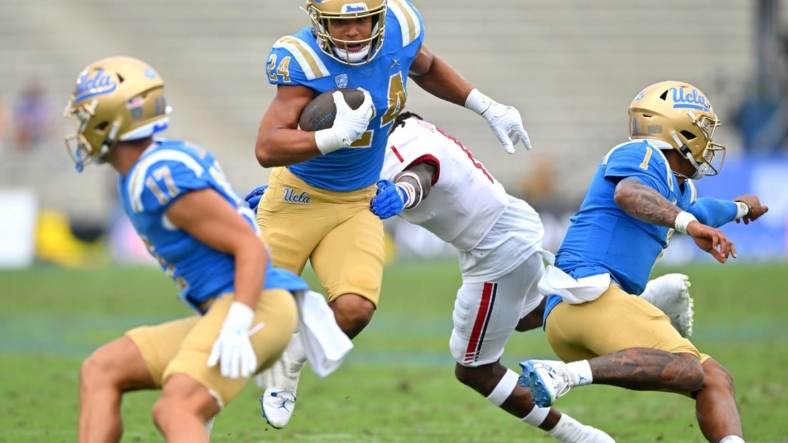 Nicholas Barr-Mira connected on four field-goal attempts, including a 24-yarder as time expired, and UCLA escaped becoming the latest Power Five conference team to lose to a Sun Belt Conference opponent this season with a 32-31 decision over South Alabama on Saturday in Pasadena, Calif.

UCLA (3-0) trailed 31-29 with about three minutes remaining and South Alabama bringing on its field-goal unit for what appeared to be a 39-yard attempt. Instead, the Jaguars attempted a fake on the fourth-and-2 play, resulting in a sack by Carl Jones Jr. and the Bruins taking possession.

Dorian Thompson-Robinson, who finished 20-of-30 passing for 263 yards and three touchdowns, completed three consecutive throws that, combined with a South Alabama penalty, moved UCLA from its own 33-yard line to deep in Jaguars territory.

A few running plays later set Barr-Mira for the chip-shot field goal. He also connected on attempts of 38, 49 and 28 yards.

Tough red-zone defense that allowed UCLA only six points combined on three of its trips inside the Jaguars 20-yard line and a balanced offense that produced 399 total yards had South Alabama ahead much of the way.

It led 17-6 in the first half, and 31-23 heading into the fourth quarter after the second Bruins turnover — a botched pitch from Thompson-Robinson to Zach Charbonnet — set South Alabama up at the 6-yard line.

The Jaguars cashed in on the takeaway with Caullin Lacy’s touchdown reception from Carter Bradley. Bradley finished 26-of-36 passing for 237 with the score and an interception. La’Damian Webb rushed for 124 yards to lead all ball-carriers, and Marco Lee scored a pair of goal-line touchdowns for South Alabama.