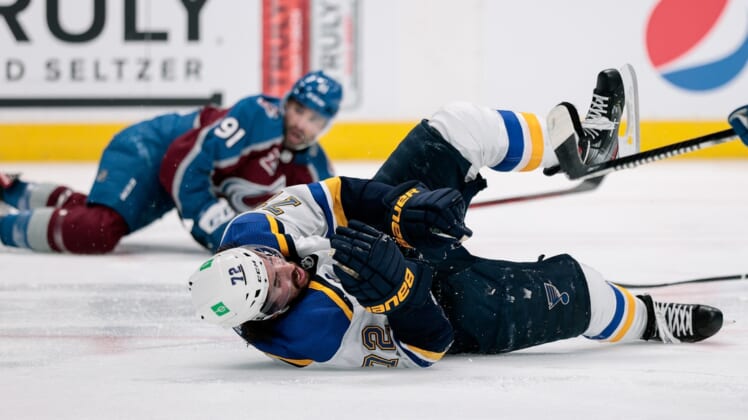 May 19, 2021; Denver, Colorado, USA; St. Louis Blues defenseman Justin Faulk (72) falls to the ice after being hit in the third period by Colorado Avalanche center Nazem Kadri (91) in game two of the first round of the 2021 Stanley Cup Playoffs at Ball Arena. Kadri would be ejected from the game for an illegal hit to the head. Mandatory Credit: Isaiah J. Downing-USA TODAY Sports

Multiple media outlets, however, reported Kadri will appeal this decision to a neutral discipline arbitrator.

Kadri was suspended following an illegal check to the head of St. Louis Blues defenseman Justin Faulk during Game 2 of their first-round series on May 19.

The initial suspension was announced two days later by the NHL Department of Player Safety. The NHL Players’ Association filed the appeal on May 23 before Commissioner Gary Bettman heard from Kadri on Thursday.

Kadri didn’t play in Games 3 and 4 against the Blues, both won by the Avalanche, as well as Colorado’s 7-1 romp versus the Vegas Golden Knights on Sunday in Game 1 of the second-round set.

It is Kadri’s third suspension in four years. The then-Toronto Maple Leafs forward was banned three games after a high hit on Boston forward Tommy Wingels in 2018, and a year later was suspended for five games after a cross-check to the head of Bruins forward Jake DeBrusk.