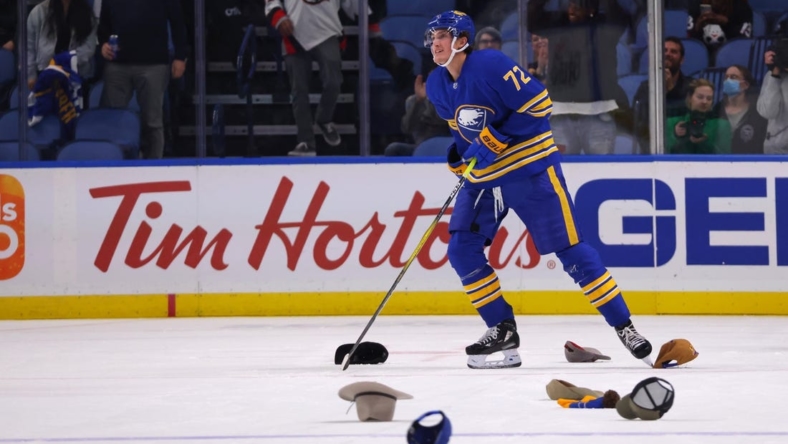 Tage Thompson recorded his second career hat trick and had three assists while Jeff Skinner scored the 300th goal of his career as the Buffalo Sabres beat the visiting Detroit Red Wings 8-3 on Monday night.

Thompson is one of six players in franchise history to tally six points in a game, becoming the first to accomplish the feat since Pat LaFontaine did so on Feb. 10, 1993. The franchise record is seven points, set by Gilbert Perreault on Feb. 1, 1976. Skinner also had two assists while Rasmus Dahlin added a goal and an assist for Buffalo during its highest-scoring game since a 9-2 win over the Ottawa Senators on Nov. 3, 2018. Jack Quinn also found the net, and Kyle Okposo notched two assists.

Detroit trailed 4-2 after two periods but made things interesting when Dylan Larkin beat Eric Comrie (15 saves) for a short-handed goal 4:19 into the third. However, the Sabres’ defense clamped down and Dahlin, Dylan Cozens, Thompson and Rasmus Asplund each followed with goals.

Olli Maatta and David Perron also scored for Detroit, which is 2-3-2 since winning its first two games of the season. The Red Wings won all four games against the Sabres during the 2021-22 season.

Stefan Noesen and Svechnikov scored in regulation for the Hurricanes, and Martin Necas had two assists. Carolina goalie Frederik Andersen made 18 saves before stopping the last two Washington attempts in the shootout.

Dylan Strome and Alex Ovechkin had goals for the Capitals. Goalie Darcy Kuemper collected 33 saves through regulation and overtime but just one in the shootout.

Alexey Toropchenko scored for the Blues. Jordan Binnington allowed five goals on 19 shots before departing midway through the game. Thomas Greiss entered and stopped all 11 shots he faced.