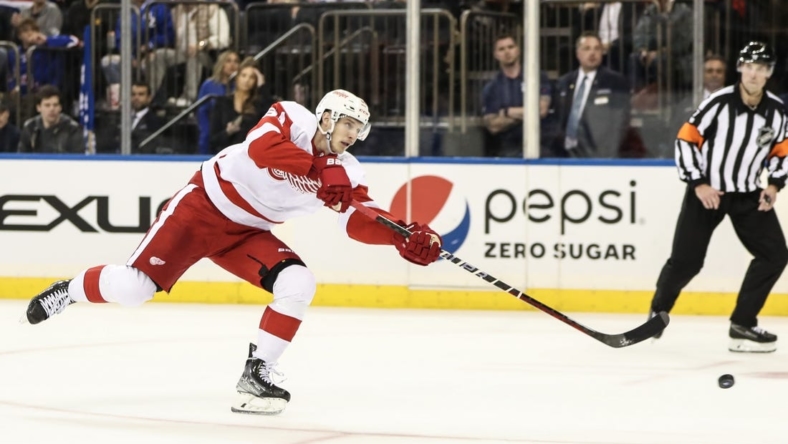 Dominik Kubalik scored a power-play goal with 2:17 remaining in overtime as the visiting Detroit Red Wings rallied for a 3-2 victory over the New York Rangers Sunday night.

Detroit won its third straight when Kubalik waited at the right side of the net for a pass from David Perron and tipped in the puck past goaltender Jaroslav Halak. Officials briefly reviewed the play to see if the Red Wings were offsides and did not change the call, allowing Detroit to end its three-game road losing streak. Halak stopped 33 shots and is 0-3-1 as a Ranger.

Kubalik’s fifth game-winning goal occurred after Perron drew a holding the stick penalty near the neutral zone on New York defenseman K’Andre Miller with 3:16 left. The tally also came after Halak had denied him on a breakaway with 3:51 remaining in regulation.

Matt Luff and Pius Suter scored in the second period for Detroit, which also beat Washington and the New York Islanders before Sunday. Kaapo Kakko scored New York’s first goal and Mika Zibanejad tallied on the power play in the opening period, but the Rangers fell to 3-3-3 in their past nine games.

John Tavares scored his team-leading eighth goal of the season 8:24 into the third period to lift Toronto past Carolina in Raleigh, N.C.

A pass from Mitchell Marner set up Tavares, who directed the puck into the net on Toronto’s first shot of the period. Calle Jarnkrok scored an earlier goal and William Nylander added a late goal for Toronto, which won for just the second time in seven road games (2-3-2). The Maple Leafs have a season-high three-game winning streak and stretched their points streak to four games.

Sam Reinhart snapped a third-period tie with his first goal of the season, then added an empty-netter, as visiting Florida beat Anaheim.

Meanwhile, ex-Duck Brandon Montour had a goal and assisted on Carter Verhaeghe’s fourth goal in three games in the first period, Sam Bennett’s goal with 11:50 left in the third and Reinhart’s empty-netter to complete the four-point night. Spencer Knight made 32 saves for the Panthers, who finished 2-2-0 on a Western road swing.

Ryan Strome posted a goal and assisted on Adam Henrique’s tally, while Isac Lundestrom converted a penalty shot with 1:14 remaining in regulation for a short-handed goal for Anaheim, which had won three of four. The Ducks entered allowing an NHL-high 478 shots on goal — and have yielded at least 44 in four straight games.