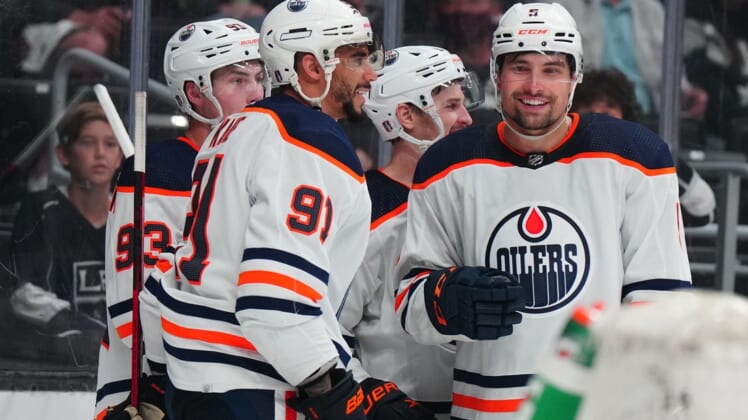 The Oilers hold a 2-1 lead in the best-of-seven set heading into Game 4 on Sunday in Los Angeles.

Leon Draisaitl collected a goal and an assist for the Oilers, while Cody Ceci had three assists and Evan Bouchard and Connor McDavid notched two assists apiece. Edmonton goalie Mike Smith made 44 saves, 19 of them in the first period.

Anze Kopitar produced a goal and an assist and Phillip Danault also scored for the Kings. Starting goalie Jonathan Quick was pulled after surrendering four goals on 17 shots. Cal Petersen stopped 16 of 20 shots in relief.

Brad Marchand had a goal and two assists as Boston used a three-goal spurt during the second and third periods in a victory over Carolina to narrow the Hurricanes’ lead to 2-1 in their Eastern Conference first-round series.

After Carolina’s Vincent Trocheck opened the scoring 9:17 in, Boston went on a four-goal run thanks to Charlie Coyle, Marchand, David Pastrnak and Taylor Hall. Coyle and Pastrnak compiled multiple-point nights by adding assists.

Ondrej Palat had a goal and an assist for the Lightning, and Ross Colton also scored. Tampa Bay’s Andrei Vasilevskiy stopped 31 shots. Game 4 of the best-of-seven series will be played Sunday in Tampa.

Kirill Kaprizov and Joel Eriksson Ek each had a goal and an assist as visiting Minnesota defeated injury-depleted St. Louis to take a 2-1 lead in their first-round Western Conference playoff series.

Goaltender Marc-Andre Fleury made 29 saves to earn 92nd career playoff victory, which tied him with Grant Fuhr for third place in NHL history. Ryan O’Reilly scored for the Blues, and Ville Husso made 28 saves.