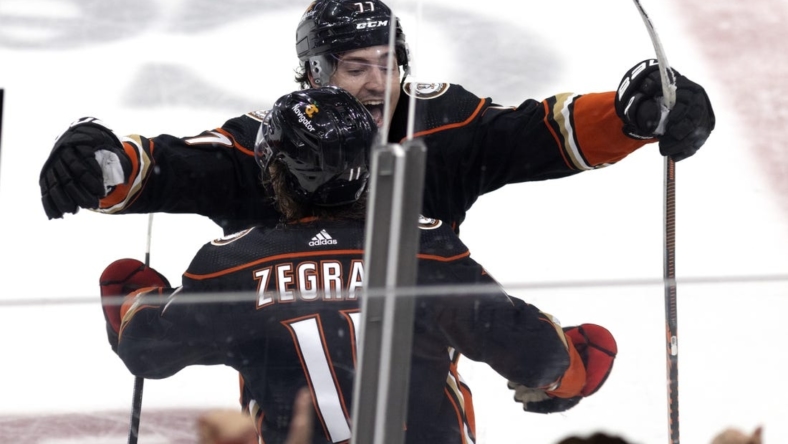 Trevor Zegras scored his second goal of the game at 2:15 of overtime and the Anaheim Ducks came back to defeat the visiting Toronto Maple Leafs 4-3 on Sunday.

Zegras finished a rush with a shot from the left circle for his sixth goal of the season, ending Anaheim’s seven-game losing streak. The Ducks trailed 3-1 less than a minute into the third period.

Seven different players scored a goal for New Jersey, which rolled to a win over Columbus in Newark, N.J.

Fabian Zetterlund scored in the first period and Nico Hischier and Ryan Graves scored 33 seconds apart early in the second to jump-start the rout for the Devils, who have won three straight and six of seven. John Marino scored in the final minute of the second period before Jonas Siegenthaler, Jesper Bratt and Miles Wood each added a goal in the third period for the Devils.

Yegor Chinakhov scored in the second period for the Blue Jackets, who have lost three straight and four of five. Goalie Elvis Merzlikins recorded 46 saves. A Devils turnover led to Chinakhov’s goal at the 6:39 mark of the third. But New Jersey began pouring it on with 22 seconds left, when Marino picked off Andrew Peeke’s pass intended for Johnny Gaudreau deep in the Blue Jackets’ zone and scored from the right faceoff circle.

Matt Boldy scored twice and Kirill Kaprizov and Frederick Gaudreau converted chances in a shootout to lift visiting Minnesota to a conquest of Chicago.

Mason Shaw added a goal and an assist for the Wild, who produced three victories during their five-game road trip. Wild goaltender Marc-Andre Fleury stopped 23 of 26 shots in regulation and overtime as he faced his former team for the first time since arriving in Minnesota via trade in March.

The Blackhawks’ Andreas Athanasiou and Boldy scored 17 seconds apart in the third period. Chicago held leads of 1-0 and 3-2, but managed the advantages for a collective 39 seconds.

Eichel broke down the left wing and then cut in front of the crease with Mark Scheifele shadowing him and tucked the puck inside the right post past Connor Hellebuyck for his fourth goal of the season.

Mark Stone also scored for Vegas, which won its fourth straight game. Adin Hill finished with 23 saves. Hellebuyck made a season-high 46 saves and Adam Lowry scored for Winnipeg, which had a three-game winning streak snapped.

Mika Zibanejad continued his hot start by scoring the tiebreaking power-play goal with 7:04 remaining in the third period as New York beat Arizona in Tempe, Ariz.

Zibanejad scored his sixth goal of the season, and fifth on the power play, 27 seconds into New York’s second man advantage. The Rangers quickly moved the puck and Zibanejad ended the sequence by getting it from Chris Kreider and lifting a wrist shot from the left side below the faceoff circle over goaltender Connor Ingram.