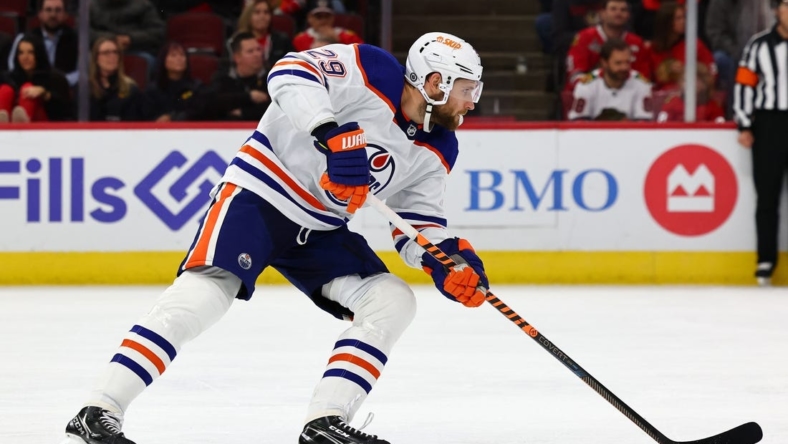 Leon Draisaitl scored the go-ahead goal with 38 seconds left and captain Connor McDavid recorded his second hat trick of the season to fuel the visiting Edmonton Oilers to a 6-5 victory over the Chicago Blackhawks on Thursday.

Chicago’s Patrick Kane cleaned up a rebound to forge a 5-5 tie with 3:11 remaining in the third period before Edmonton answered in the final minute. Evander Kane’s cross-slot feed sailed past Blackhawks defensemen Caleb Jones and Seth Jones to an unmarked Draisaitl, who celebrated his 27th birthday with his fourth goal of the season.

McDavid scored twice during an eight-minute stretch in the second period before deking Chicago defenseman Jake McCabe and beating goalie Alex Stalock between the pads to give Edmonton a 5-4 lead midway into the third. McDavid has a team-leading eight goals on the season.

The Oilers went 3-for-7 on the power play to earn their third straight win while Chicago was 2-for-10 on the advantage as its four-game winning streak ended.

Joel Farabee had one goal and one assist, goaltender Carter Hart tied his career high with 48 saves and host Philadelphia defeated Florida.

Gustav Forsling, Josh Mahura and Brandon Montour scored one goal apiece for the Panthers, who dropped their second in a row. Panthers goaltender Sergei Bobrovsky

Tanner Jeannot, Michael McCarron, Zach Sanford, Ryan Johansen and Mikael Granlund also scored for the Predators, who were 0-4-1 since returning from the NHL’s Global Series in Prague. Matt Duchene and Filip Forsberg had three assists for Nashville and goaltender Juuse Saros made 33 saves.

Robert Thomas and Brayden Schenn scored for the Blues, who have lost three consecutive games. Justin Faulk had two assists and Thomas Greiss stopped 36 of 41 shots.

With the game knotted at 2 and less than four minutes remaining in regulation, Anderson ripped a long shot into traffic in front of Buffalo’s net. Brendan Gallagher was initially credited with his second goal of the night on a deflection but the goal was ultimately credited to Anderson, his third of the season.

Outstanding all night, goalie Sam Montembeault made a final stop of Rasmus Dahlin’s one-timer from in close as time expired. Kaiden Guhle found the net for the first time in his NHL career for Montreal’s other goal.

Brad Marchand scored two goals and added an assist in his first game of the season after returning from double hip surgery approximately a month ahead of schedule as host Boston downed Detroit.

Marchand assisted on Charlie Coyle’s goal in the first period, scored himself in the second, then started Boston’s three-goal spurt over just 1:39 early in the third. David Pastrnak had a goal and two assists, while defensemen Hampus Lindholm and Derek Forbort contributed two assists apiece as Boston improved to 7-1-0.

Craig Smith added his first goal of the season and Jeremy Swayman stopped 28 shots for the Bruins, who have won four straight and improved to 6-0-0 on home ice. Adam Erne scored the lone goal and Ville Husso made 28 saves for Detroit.

Kirill Kaprizov and Frederick Gaudreau each had a goal and an assist and Marc-Andre Fleury made 27 saves as Minnesota collected a win over host Ottawa.

Mats Zuccarello and Ryan Hartman also scored for the Wild, who are on a four-game point streak (3-0-1).

The loss ended the Senators’ four-game winning streak, all on home ice. A win would’ve given Ottawa a new franchise record for most consecutive home victories to begin a season. Alex DeBrincat had a goal and an assist for the Senators, while Thomas Chabot had Ottawa’s other goal.

Jake Oettinger made 27 saves for his first shutout of the season and Dallas defeated visiting Washington.

Jason Robertson and Joel Kiviranta each scored his third goal of the season for the Stars, who had lost two straight. Oettinger recorded his third career shutout.

Darcy Kuemper made 25 saves for the Capitals, who had won four of their past five while averaging more than four goals per game. Dallas has allowed just two goals overall in three home games this season, all wins.