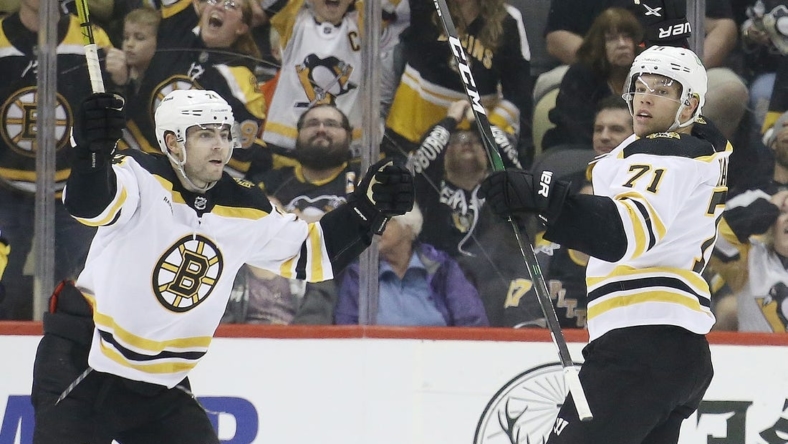 Hampus Lindholm went coast to coast and scored from the left hash marks at 3:37 of overtime Tuesday as the visiting Boston Bruins erased a three-goal deficit to win their sixth straight, 6-5 over the Pittsburgh Penguins.

Boston goaltender Linus Ullmark allowed five goals on 18 shots before being pulled in the second. Jeremy Swayman stopped all four shots he faced but left with an apparent left leg injury. Ullmark returned and went on to finish with 29 saves.

Evgeni Malkin had a goal and an assist, and Sidney Crosby, Bryan Rust, Josh Archibald and Rickard Rakell also scored for the Penguins, who have lost five straight. Pittsburgh goaltender Tristan Jarry made 34 saves.

Theodore cut to the net and took a pass from Jack Eichel in the slot and then fired a wrist shot past Capitals backup goaltender Charlie Lindgren. Eichel and William Carrier also scored goals and Alex Pietrangelo had three assists for Vegas. Logan Thompson finished with 19 saves for the Golden Knights.

Leon Draisaitl had a goal and four assists to help host Edmonton beat Nashville for its fifth straight win.

Connor McDavid had two goals and two assists, Evander Kane had a hat trick and Jack Campbell made 19 saves for the Oilers.

Filip Forsberg had a goal and two assists while Mikael Granlund and Matt Duchene had two assists apiece for the Predators, who are 1-6-1 in their past eight games. Juuse Saros made 30 saves.

Beniers scored off a pass from Jordan Eberle on a three-on-one breakaway to snap a 4-4 tie at 13:26 of the final period. Carson Soucy, Morgan Geekie, Daniel Sprong and Yanni Gourde also scored for Seattle. Oliver Bjorkstrand notched two assists.

Tyler Toffoli had a goal and an assist and Nikita Zadorov, Nazem Kadri and Trevor Lewis also tallied for the Flames. Elias Lindholm had two assists, and Dan Vladar stopped 21 of 26 shots.

Michael McLeod, Dawson Mercer, Yegor Sharangovich and Jack Hughes also scored for the Devils, who have won four straight — their longest winning streak since they won their first four games of the 2018-19 season. Mackenzie Blackwood made 21 saves for the victory.

Nikita Kucherov scored the tiebreaking goal late in the third period as Tampa Bay earned a comeback win over Ottawa. Kucherov wound up with three points.

Ottawa captain Brady Tkachuk missed a point-blank chance with one second to go as the visitors lost their third straight game, while Tampa Bay won its third in a row.

Mikhail Sergachev and Brayden Point each had a goal and an assist and Alex Killorn also scored for the Lightning, who got 12 saves from Andrei Vasilevskiy. Ottawa’s Dylan Gambrell scored in his season debut but was later ejected. Mathieu Joseph and Claude Giroux tallied, and Anton Forsberg made 30 saves for the Senators.

Kirill Kaprizov scored twice, Matt Boldy had a goal with an assist and Marc-Andre Fleury made 34 saves as Minnesota beat visiting Montreal in Saint Paul, Minn.

Mason Shaw also scored for the Wild, who improved to 2-3-0 at home on the young campaign.

Fleury, 37, seemed headed for his 72nd career shutout until Montreal’s Nick Suzuki scored on the power play with 6:30 remaining in regulation. Jake Allen stopped 27 shots for the Canadiens.

Brock Nelson scored a goal and had an assist for visiting New York, which continued its surge with a win over Chicago.

Anders Lee poked home a shot by Nelson in the first period and Zach Parise added an empty-netter with 13.1 seconds left in the third for the Islanders, who have won four straight. New York goalie Ilya Sorokin made 21 saves.

Jonathan Toews scored in the third period for the Blackhawks, who have lost four straight (0-2-2). Backup goalie Arvid Soderblom recorded 28 saves in relief of Alex Stalock, who stopped two shots before exiting following a collision with Islanders right winger Casey Cizikas 2:56 into the first.

Roope Hintz had two goals and an assist for Dallas in a win against visiting Los Angeles.

Jason Robertson had a goal and two assists, Tyler Seguin and Joe Pavelski also scored and Scott Wedgewood made 30 saves for the Stars, who scored three goals in a 90-second span of the second period. The Stars did not have No. 1 goalie Jake Oettinger (lower-body injury).

Kevin Fiala and Arthur Kaliyev scored and Cal Petersen made 35 saves for the Kings, who were coming off a 5-1 road win over the St. Louis Blues on Monday.

Karel Vejmelka made 41 saves and Clayton Keller had a goal and an assist as Arizona picked up its first win in three tries at Mullett Arena with a victory over Florida in Tempe, Ariz.

Nick Ritchie and Lawson Crouse also scored for Arizona, which snapped a two-game losing streak. The Coyotes, who play 20 of their first 24 games on the road while a locker room annex is being finished, are slated to play in the 5,000-seat arena on the Arizona State University campus for at least the next three seasons until a proposed new arena in Tempe is built.

Colin White scored a goal and Spencer Knight stopped 18 of 20 shots for the Panthers, who lost for the third time in four games.

After the teams were scoreless in regulation, Mika Zibanejad collected a loose puck in the Rangers’ end and flipped it to Kreider, who was streaking down the middle of the ice. Kreider took the pass and slipped a backhander past goalie Carter Hart for his fourth goal of the season.

Kreider’s goal extended the Rangers’ winning streak to three games and dealt the Flyers their third loss in the past four games, though the past two setbacks came in overtime. New York goalie Igor Shesterkin made 19 saves. Hart stopped 35 shots.

Adam Henrique scored two goals for visiting Anaheim in a shootout win at San Jose. Trevor Zegras and Troy Terry scored in the shootout for the Ducks, while Logan Couture scored the Sharks’ only shootout goal.

Frank Vatrano, Ryan Strome and Max Comtois also scored and Anthony Stolarz made 39 saves for the Ducks, who have won two in a row for the first time this season but remain the only NHL team without a win in regulation.

Erik Karlsson had three goals and an assist, Timo Meier scored two goals and Kaapo Kahkonen made 39 saves for San Jose, which is 1-2-1 in the past four games.