NHL extends hiatus for another day, now paused until Tuesday 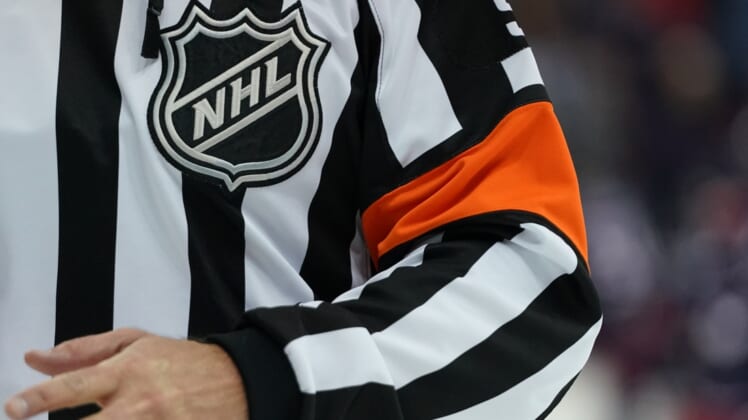 Oct 20, 2018; Columbus, OH, USA; A view of the NHL shield logo on the jersey of an official in the game of the Chicago Blackhawks against the Columbus Blue Jackets at Nationwide Arena. Mandatory Credit: Aaron Doster-USA TODAY Sports

The NHL extended its holiday break by another day as its teams continue to cope with widespread COVID-19 cases.

The league announced Friday evening that the 14 games originally scheduled for Monday would be postponed, and play instead would resume Tuesday, Dec. 28.

Its original holiday break was slated for Dec. 24-26, but with several teams shutting down due to COVID-19 outbreaks this month, the league and the NHL Player’s Association agreed to pause the schedule two days earlier. Now the leaguewide hiatus is on the books for six straight days, Dec. 22-27.

“The League had planned to resume its schedule on Dec. 27, but in order to allow the League an adequate opportunity to analyze League-wide testing results and to assess Clubs’ readiness to play, the target date for resumption of game play will be pushed back an additional day,” the NHL said in a statement Friday. “Teams will return to practice on Dec. 26 and it is expected that the League will provide an update on its return to play plans by the end of day on Sunday.”

Four NHL games are slated for Tuesday night: Montreal at Tampa Bay, Columbus at Chicago, Vegas at Los Angeles and Arizona at San Jose, with 11 games slated for Wednesday.