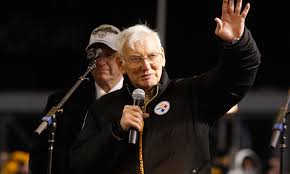 Former Pittsburgh Steelers owner and chairman Dan Rooney passed away earlier this month at the age of 84. A transcendent figure around the sports world, those within football took time to pay their respects following his death.

An Ambassador to Ireland under Barack Obama, the former president also took time out of his schedule to attend Rooney’s funeral.

Needless to say, the respect this man received within the football world was amazing. It just goes to show us how he shaped the game we love so much today.

As the next generation of players hear their names called in the draft this week, the league itself will be paying respects to the grandfather of equality in the NFL.

In honor of the late #Steelers Chairman Dan Rooney, all football ops & front office staff will wear these pins tonight for the #NFLDraft pic.twitter.com/HifhtjOPcM

It’s nice to see the league take time out to honor a man that played a central role in the popularity the NFL is seeing today. From the Rooney Rule to his role in ending the strike back in 1982, Rooney was a giant in the industry.