NFL Salaries Continue to Lag Behind Other Leagues

We saw nearly $250 million doled out to three Pro Bowl players around the NFL on Wednesday. That’s a whole lot of dough paid out to some of the best players in the league.

However, it doesn’t change the fact that NFL salaries are still lagging behind both the NBA and MLB.

A recent chart by Business Insider magnifies the disparity: 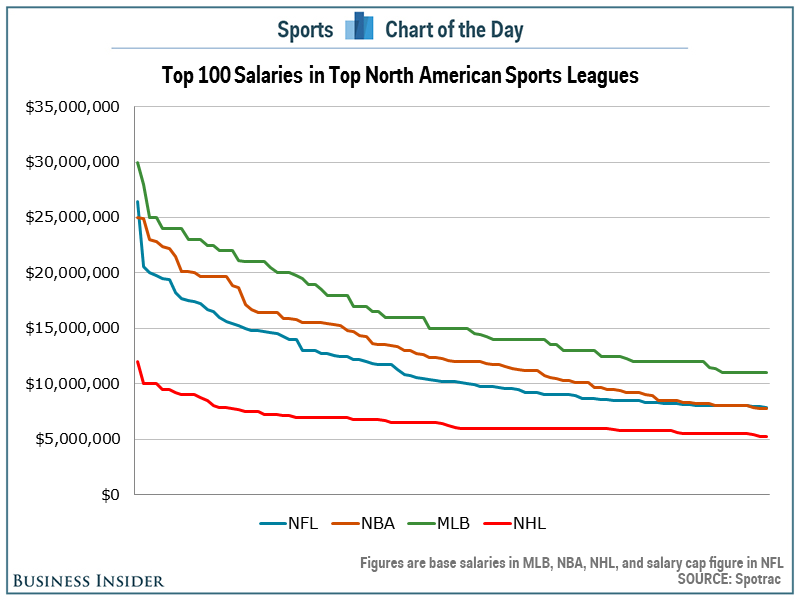 This chart shows the following average salaries for the top-100 highest-paid players in each of the four major professional North American leagues:

The interesting dynamic here, as Business Insider points out, is that the other three sports dole out guaranteed deals on a much larger scale than the NFL. Even as football players earn significantly less than baseball players, those taking to the diamond are given long-term security.

Consider this: Dez Bryant’s five-year, $70 million contract includes $45 million in guarantees, $32 million of which was fully guaranteed at signing.

A total of 29 NBA players signed free-agent contracts over the past two weeks with more guaranteed money than Bryant’s deal initially included.

Taking it a step further, 21 of those players will earn more on an annual basis than was Bryant is set to make on his new deal with the Cowboys.

In Major League Baseball, 65 players earn a larger annual average than Bryant, including seven members of the New York Yankees.

As a league that trumps all others when it comes to revenue and presents the most potential harm to its players long-term health, this is absolutely ridiculous.