This season is a pivotal year in the development of Jets QB Zach Wilson. In his rookie season, the second overall pick in the 2021 NFL draft had a lot of growing pains. Figuratively and literally, as he missed four games due to injury midway through the season. However, while his stats from his first season may not jump off the page for some, there are still talent evaluators around the NFL who felt the 23-year-old did show the skills that made him such a highly touted prospect out of BYU.

One person who was impressed by Wilson’s play in 2021 was Dallas Cowboys legend Troy Aikman. The new analyst for Monday Night Football told ESPN earlier this week that while Wilson did struggle in his rookie season, he also showcased the serious upside he has as a starting QB in the NFL.

As much as anyone in NFL history, Troy Aikman understands how difficult it is to be a starting QB as a rookie. In his debut year with the Cowboys in 1989, the team went 0-11 in his starts and he threw twice as many interceptions (18) as he did touchdowns (9). However, we all know how the rest of his career went as he helped lead Dallas to three Super Bowl titles in the 1990s.

Aikman feels for Wilson and understands the weight of expectation on first-round quarterbacks can be difficult to carry, and in a way, it’s all the fault of Pittsburgh Steelers great Ben Roethlisberger.

Roethlisberger did set a high standard for what a rookie QB can do when he went 13-0 in his debut season in 2004 and took the Steelers to the AFC Conference championship game. 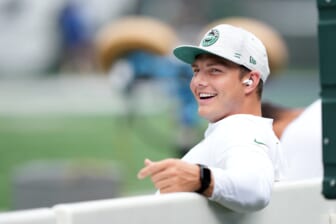 Wilson’s status for the Jets’ season opener against the Baltimore Ravens at 1 PM ET on Sunday is still unclear, after surgery on his knee a few weeks go. However, after practicing earlier this week, he could be a game-time decision.