NFL expected to implement a bubble for NFL Playoffs due to COVID-19? 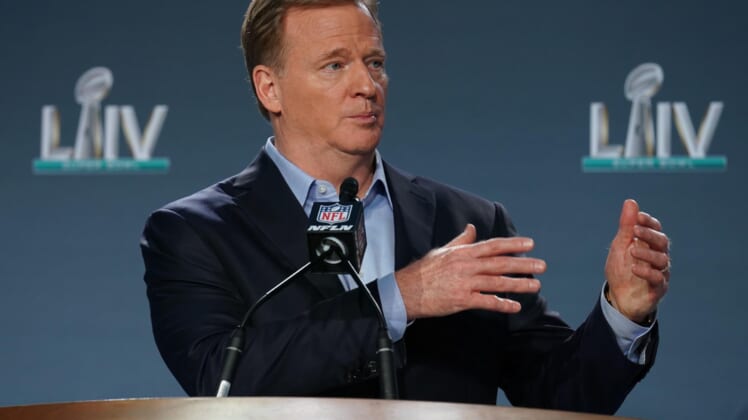 The NFL is pushing forward with its 2020 season through the COVID-19 pandemic and an outbreak, postponing one game and rescheduling another before Week 5. With the situation worsening by the day, the league is already considering significant changes that would dramatically impact the NFL Playoffs.

In a 17-week regular season, the NFL only has so much wiggle room with its schedule to account for postponements and delayed games. When the postseason rolls around, however, there will be no time for moving games around. As a result, the NFL may follow in the footsteps of the NBA, MLB and NHL.

Will the NFL use a bubble this year?

When the NFL began preparing for its 2020 season in the spring, the league was already aware of the COVID-19 pandemic and hopeful the situation would improve by the fall. Even as cases and deaths from the coronavirus kept skyrocketing, the league stuck to its plans for a full season, with each team operating freely.

Despite creating strict COVID-19 protocols and emphasizing the importance of following the guidelines, the NFL has experienced its first outbreak. As the league and players’ union investigate what led to the Titans’ 23 cases of the coronavirus, with alarming accusations already emerging, commissioner Roger Goodell and league executives are contemplating major adjustments to avoid similar problems in the future.

The biggest priority, avoiding an outbreak during the NFL Playoffs. It is the marquee stretch of every season and the Super Bowl is routinely the most-watched show every year. Given the importance of protecting the playoffs, it came as no surprise that the league was considering a bubble.

While it’s unlikely that the NFL will move every team into hotels for regional bubbles during the season, according to The Washington Post’s Mark Maske, it’s a different story for the playoffs. After speaking with multiple people around the league, Yahoo Sports’ Charles Robinson shared that a bubble for the NFL Playoffs is extremely likely.

“I’m telling you, this postseason bubble is going to happen,” Charles Robinson said, via the Yahoo Sports NFL Podcast. “I am almost 100% certain they are going to figure out a way to bubble up, maybe separately, every single one of these teams.”

The expansion of the NFL Playoffs adds another wrinkle to this possibility. As part of the new collective-bargaining agreement, the NFL moved to a 14-team playoff format for the 2020 season and beyond.

We could see the NFL take the same approach as MLB for the 2020 postseason. Creating regional bubbles with teams divided into different areas, would create a safe environment where players and coaches would be tested daily and kept isolated from unnecessary exposure to the virus.

The AFC and NFC Playoffs would be hosted in separate cities, before Super Bowl LV takes place at Raymond James Stadium in Tampa, Florida. It would likely mean banning fans from attending any games, which is the same rules the NBA and NHL have used, but the consequences would be far outweighed by the benefit of keeping players and coaches healthy.

It certainly wouldn’t be the outcome the NFL hoped for coming into the year, but a full season and NFL Playoffs requires sacrifices and adjustments from everyone.