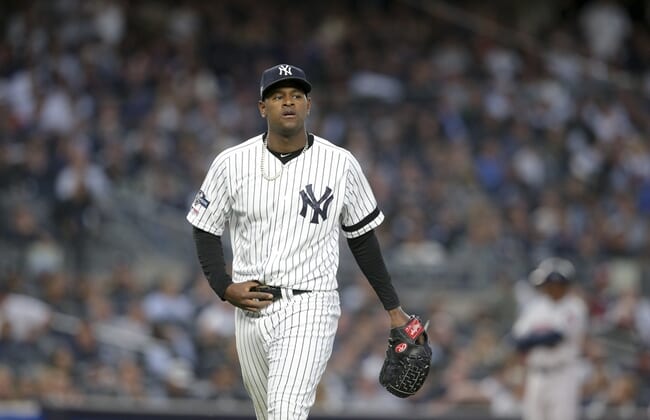 Luis Severino, who hasn’t appeared in a major-league game since the 2019 postseason, is getting closer to his return to the New York Yankees.

Manager Aaron Boone said Monday that Severino could throw in a rehab assignment as soon as this weekend.

“That’s the hope. He’s scheduled to throw a simulated game today, again, where he’ll have three ups, essentially a three-inning sim game,” Boone said. “If all goes well there, potentially next Sunday would then be him in game action.”

Severino, 27, missed much of the 2019 regular season because of right shoulder rotator cuff inflammation and Grade 2 lat strain. After back-to-back seasons with 30-plus starts in 2017 and ’18, Severino made five total starts in 2019 and threw just 12 innings in the regular season, plus 8 1/3 more in the playoffs.

Boone said if there are no setbacks, Severino could return around the All-Star break in July.

“I don’t want to get too far ahead of ourselves. We want today to go well, and then obviously that next step is another big one into a game with a team and stuff,” Boone said. “Let’s get past today and hope everything goes well.”

He signed a four-year, $40 million extension in spring training in February 2019.