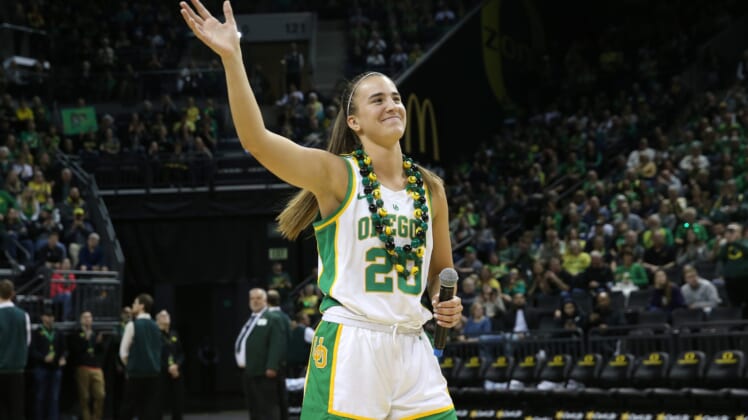 Oregon’s Sabrina Ionescu waves to the sold out crowd during the post game program for seniors after the end of the regular season.

Sabrina Ionescu was a triple-double machine at the University of Oregon, recording 26 in her college career. That is more than any man or woman in Division I basketball history. No other woman has recorded more than 10 triple-doubles while no man has more than 15.

There had not been a triple-double in a WNBA game since July 7, 2019 when Chelsea Gray recorded 13 points, 13 assists and 10 rebounds with the Los Angeles Sparks against the Washington Mystics.

The first triple-double in WNBA history came from Hall of Famer Sheryl Swoopes with the Houston Comets and is coincidentally the only player with two career triple-doubles.

The 2005 WNBA season is the only season that has seen a triple-double recorded more than once coming from the aforementioned Sheryl Swoopes and Deanna Nolan.

Sabrina Ionescu is just six games into her WNBA career missing most of last season with an ankle injury. So far this season, she is averaging 21.0 points, 9.0 assists and 7.0 rebounds.

The New York Liberty are currently 3-0, good for their best start to a season since 2007 when they began with a 5-0 record. In addition, they have not finished a season with a winning record since 2017.