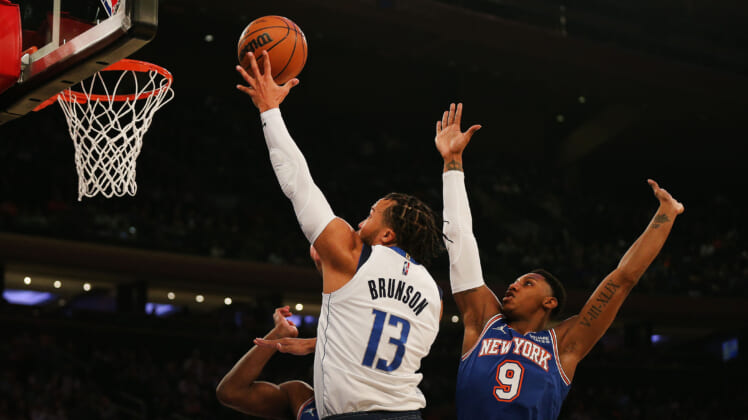 The New York Knicks finished the season 37-45, a massive disappointment after a 41-win campaign and a playoff appearance a year prior. As the focus now shifts towards free agency, New York seemingly already has its top target in mind.

Adding Kemba Walker and retaining Derrick Rose did nothing to solve the Knicks’ issues at point guard. It continues to be a weak spot on the team’s radar and one that team president Leon Rose wants to address this summer.

The top NBA free agents in 2022 are appealing on the surface with Bradley Beal, Kyrie Irving and James Harden all free to test the open market. However, the trio of All-Star guards all intend to re-sign with their teams and likely won’t spend even an hour on the open market.

With the best options off the table, New York must look elsewhere. It seems the front office is already setting its sights on the guard who multiple teams will covet this summer.

According to Marc Berman of the New York Post, point guard Jalen Brunson is the Knicks’ top target in free agency this summer.

Turning 26 on Aug. 31, Brunson would provide New York with much-needed youth and athleticism at the position. However, he is on the radar of multiple teams and is believed to be a priority for the Detroit Pistons this offseason.

If it comes down to the best offer, the Pistons likely win the bidding war. Detroit can also offer him the opportunity to play alongside Cade Cunningham and potentially Jabari Smith or Chet Holmgren. The Knicks will be making the appeal of taking the court at Madison Square Garden and potentially becoming a bigger name in New York.

Once Brunson comes off the table, the options get even more limited. Collin Sexton is appealing, but he’s a restricted free agent. Worth noting, per Berman, the Knicks had trade discussions with the Cavaliers before the 2021 NBA Draft.

Sexton will be fully recovered from a torn meniscus and there is no denying his scoring ability. However, Sexton received criticism in Cleveland for not making his teammates better on the court and his unwillingness to share the ball at times could be an issue.

The Cavaliers would certainly be willing to part with him, considering the success they had without him. However, there will be a few interested teams vying for his services and a sign-and-trade complicates matters for New York.

Ricky Rubio could also be an option, especially given his experience playing for Tom Thibodeau. However, he is recovering from a torn ACL. Considering the talent drop off after Brunson and Sexton, New York might have to pursue a trade if it misses on its free-agent targets.