The first year for a quarterback transitioning to the NFL is almost always a difficult one — especially when asked to take the reins as the starter right out of the gate.

Such was the case for New York Jets quarterback Zach Wilson after he was selected second overall in the 2021 NFL Draft right behind Trevor Lawrence.

Wilson showed the same flashes of greatness reminiscent of what sparked his Joe Burrow-like rise at BYU at times, but also went through some of the same types of rookie growing pains that so many other first-year quarterbacks trying to make the jump with a struggling team do.

Wilson started 13 games during his rookie season, finishing out the year with a 55.6% completion percentage (213-of-383) with nine touchdowns and 11 interceptions. One of his best performances came ins his second-ever home game when he led the Jets to a 27-24 overtime comeback win over the Tennessee Titans in which he completed 61.8% of his passes (21-of-34) for 297 yards with two touchdowns and one interception.

The pass that really gave Wilson and the Jets what they needed in the fourth quarter of that game was a 53-yarder to what appeared to be a covered Corey Davis that gave flashbacks to the rare talent BYU Wilson showed, making an extremely difficult pass into what looked like an impossibly tight window that was perfectly placed.

In fact, Wilson looked more like his college self in that game than any other contest of the year as he played out the most consistent outing of his young career.

It’s things like the advanced mental processing Wilson showed on the field and pinpoint placement on one of the toughest throws a quarterback can make that really catch the eye and show the truly special foundation Wilson has to build off of.

And Wilson’s ability to do things like this come from years of watching film and an uncanny way of being able to emulate what he sees to a T. That particular pass to Davis is something Wilson has been working on perfecting since the day he downloaded a plethora of Burrow film to his iPad.

“[Burrow is] definitely someone I’ll be watching in the NFL now, my junior year; he was a huge part of my mental success,” Zach Wilson told me ahead of the 2021 NFL Draft. “The ability to throw the ball into spots where maybe you think somebody is covered, but they’re really open. I really did a lot of studying the way that he played the game, and I think he did it all the right way. He knew exactly what he was doing on every play.”

However, the most important takeaway from the year was that the Jets got four wins, and it seems bland on its own, is that Zach Wilson was progressively improving with each game — obviously something you want to see out of any player getting started in the NFL. That progression has continued throughout offseason work and Jets Head Coach Robert Saleh has taken note of it.

“He’s got a really good early command of the offense and he’s doing a really good job in regards to that. There’s little things that he’s doing where you’re seeing a little more security. He’s not a rookie, so he’s being a little more vocal. He looks good. He’s getting more comfortable, obviously grasping the offense. He’s never had trouble grasping the offense, but he was a rookie so he goes through it. He’s much further ahead at this point than he was a year ago, for sure.”

Saleh also noted Wilson had put on weight, something that will help him absorb hits better, though he’s still currently listed at 214 pounds on the Jets’ website.

Building around Wilson was important for the Jets heading into the 2022 NFL Draft. They took care of business, making four offensive selections that deserve to be graded highly. That included adding Ohio State wide receiver Garrett Wilson (Round 1, No. 10), Iowa State running back Breece Hall (Round 2, No. 36), Ohio State tight end Jeremy Ruckert (Round 3, No. 101) and Louisiana offensive tackle Max Mitchell (Round 4, No. 111).

The Wilson-Wilson connection will be exciting to watch moving forward as the quarterback gains a much-needed weapon. The former Buckeye brings a high level of speed and athleticism to New York’s wide receiver corps — something he showcased at the 2022 NFL Scouting Combine where he posted a 4.38-second time on the 40-yard dash.

He’s a sharp route-runner at at all levels who can make contested catches, get vertical and has experience playing both on the outside and in the slot. He started his career off as an outside receiver for the Buckeyes in 2019 before moving inside in 2020 and then back outside in 2021. He joins what’s become an exciting Jets wide receiver room that includes Braxton Berrios, Corey Davis and Elijah Moore.

Hall, the Jets’ second offensive addition, showed a great amount of versatility suiting up for the Cyclones. That is sure to be appreciated at the NFL level where running backs are expected to be able to wear a lot of hats.

The Iowa State offense was tailored to Hall as he recorded 511 carries over the last two seasons — 111 more than any other Power 5 running back. He’s an every-down back who also played a role in the passing game, reeling in 82 receptions for 734 yards and six touchdowns. He’s a good scheme-fit for New York and will be able to shoulder a large load from Day 1. Hall will couple nicely with second-year Jets rusher Michael Carter, who put together an impressive rookie season. 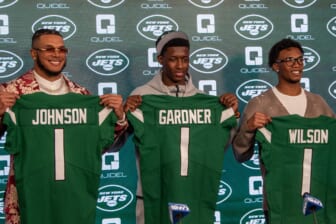 The Jets added even more depth to their offense, something that can only benefit Wilson moving forward, by adding Ruckert in the third round. It’s an interesting pick in that the Jets already acquired C.J. Uzomah and Tyler Conklin, but they get a quality player at a good spot in the draft by doing so.

Ruckert may end up being a bigger contributor at the pro level over time, not necessarily popping on the college stat sheet because of the way he was overshadowed by the wide receiver talent the Buckeyes had on the roster. He finished his career with 54 catches for 615 yards and 12 touchdowns, garnering the most praise for his tough, bulldog-esque run-blocking ability and mentality.

He completes a Jets tight end room that is now overhauled in the best sense of the word.

In addition to three new weapons that can do a lot of different things at their respective positions, Wilson potentially gains some added protection with the Mitchell pickup in the fourth round. The Louisiana product isn’t going to be an immediate starter, as a lot players selected at this point in the draft are not. He’s a player the Jets could use at guard or tackle down the line with George Fant set to become a free agent next year.

Granted the Jets can keep Zach Wilson upright after he was sacked 44 times in 2021, the third-most in the league behind only Joe Burrow and Ryan Tannehill, he’s set to make a significant rise in 2022 between his own play and the new and improved pieces around him.