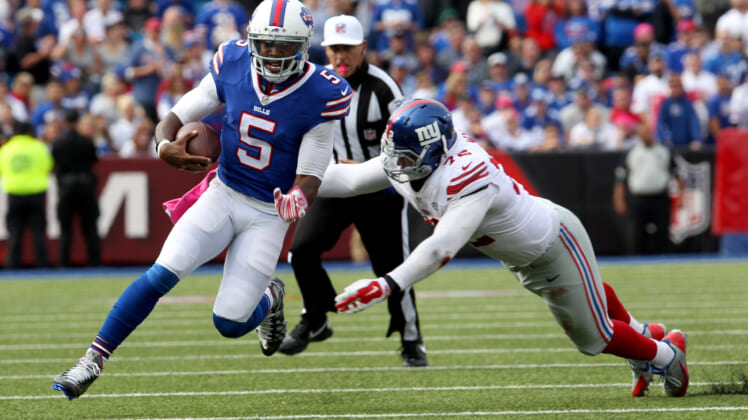 After missing out on signing Mitchell Trubisky who agreed to a two-year deal with the Pittsburgh Steelers on Monday, the New York Giants have signed veteran quarterback Tyrod Taylor.

The deal is reportedly a two-year, $11 million contract for the 32-year-old Taylor, and it could be worth up to as much as $17 million with incentives.

Taylor will be entering his 12th season in the league where he’s played for the Ravens, Bills, Browns, Chargers, and Texans. There’s familiarity between him and general manager Joe Schoen from their time together with the Bills in 2017.

Tyrod Taylor was a member of the Baltimore Ravens Super Bowl XLVII team when he was a backup to Joe Flacco. He would leave the Ravens following the 2014 season and signed a three-year deal with the Buffalo Bills. As a starter for the Bills, he compiled a 22-20 record before being traded to the Browns in March of 2018.

Last season with the Texans he appeared in six games and completed 91 out of 150 passes for 966 yards, with five touchdowns and five interceptions, with the Texans going 2-4 in those games.

After witnessing what happened last season with Mike Glennon and Jake Fromm when Daniel Jones was lost for the season with an injury, adding a capable quarterback to the roster was going to be a priority this season.

Schoen and head coach Brian Daboll wanted to give Daniel Jones competition for the starting job, and Taylor is the perfect candidate. His composure and experience will have him ready to be the backup or starter.

It will be interesting to watch Taylor and Jones compete to see who will be the starter once training camp opens in July. Based on John Mara’s comments from earlier in the offseason, they seem set to go with Danny Dimes, at least to begin with.