New Jersey Governor: ‘Too early’ to tell if Giants, Jets can play with fans in stadium 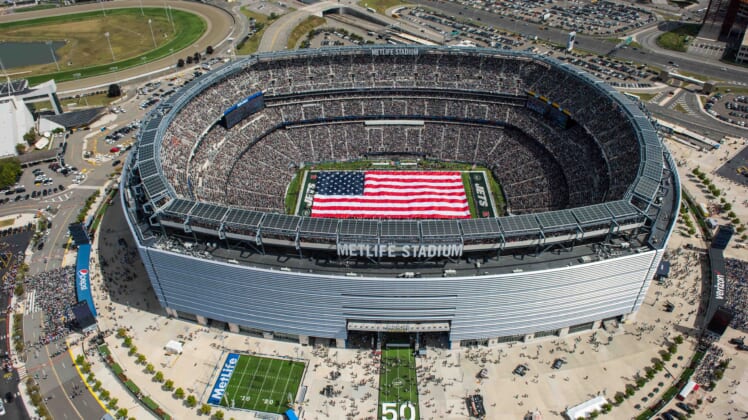 Sep 11, 2016; East Rutherford, NJ, USA; A aerial view of MetLife Stadium during the national anthem with a 100 yard American Flag before the start of the game between the Cincinnati Bengals and the The New York Jets. Mandatory Credit: William Hauser-USA TODAY Sports

Will the New York Giants and New York Jets be able to play in front of fans at MetLife Stadium this fall? That’s a big question nobody has an answer to just yet.

MetLife Stadium is located in East Rutherford, New Jersey. The state is currently in Phase 2 of its reopening plan.

These are good, positive signs that the season will start on time amid the COVID-19 pandemic.

However, when asked about whether fans could attend games, New Jersey Governor Phil Murphy made it clear it’s “too early to tell.”

“I’ve spoken to Roger Goodell, we speak with the Giants and the Jets all the time,” Murphy said, speaking with Sports Illustrated. “I think it’s too early to tell on fans. We’re taking at this point, baby steps and slowly but surely trying to get there beginning with the staffs, the coaches, the players and I think we have to see where it goes from here.”

Murphy said the trends in New Jersey are “getting much, much better.” However, he did express caution about projecting too far due to the ongoing protests happening in America right now.

“I don’t think anyone has that crystal ball with complete clarity of where this virus is going to go, where our behavior is going to go…on top of the worst health care crisis in the history of the country, we now have an extraordinary killing in broad daylight of a black man that has stain of racism,” Murphy said. “And the protesting and now people are congregating to voice their angry which I completely get, I completely support. But that’s another dimension we now have to add in to where this is taking us.”

Giants and Jets should start training camp on time

There is plenty of uncertainty about what the season will look like this fall.

However, the NFL is currently preparing for training camps, preseason games and the regular season to begin on time as scheduled. The Giants and Jets, Governor Murphy believes, should not have any issues starting on time (mid-July) in New Jersey. This is all positive news heading into the summer months.