Tajon Buchanan scored the go-ahead goal in the 65th minute to lift the host New England Revolution to a 2-1 victory over New York City FC on Saturday in Foxborough, Mass.

Emmanuel Boateng scored in the 21st minute and Carles Gil notched his MLS-best 16th assist for the Revolution (17-4-4, 55 points), who matched a club record for victories in a season. New England also had 17 wins in both the 2005 and 2014 seasons.

Matt Turner finished with one save as the Revolution took advantage of the shorthanded NYCFC to improve to 10-1-1 in their last 12 matches.

The visitors were forced to play with just 10 men after Alfredo Morales received a second yellow card for a bad foul in the 53rd minute. His initial card came in stoppage time of the first half.

The Revolution enjoyed the better of play from that point before a brilliant individual effort by Gil set up Buchanan’s seventh goal of the season and fourth in as many matches. Gil created space along the right side before finding an unmarked Buchanan, who unleashed a shot from the top of the box that sailed past Johnson.

Castellanos worked his way along the top of the box before deftly flicking the ball ahead to Rodriguez, who made no mistake for his third goal of the season. 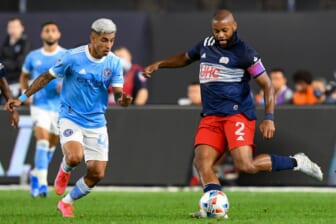 The Revolution responded 10 minutes later as Teal Bunbury’s cross was met with a neat touch from Edward Kizza. Boateng quickly stepped into a shot that sailed inside the right post for his second goal of the season.

New England’s Henry Kessler alertly cleared a loose ball headed toward the net in the 37th minute. The Revolution raced up field and nearly took a 2-1 advantage, but Tommy McNamara’s shot following a cross from Brandon Bye caromed off the left post from close range.