The setback halted New England’s four-game winning streak as well as its nine-match unbeaten stretch (8-0-1). The league-best Revolution (15-4-4, 49 points) were on the losing end for the first time since falling 3-2 to Toronto FC on July 7.

NYCFC goalkeeper Sean Johnson posted his sixth shutout of the season but was called on to make just one save.

NYCFC had a 19-12 edge in shots and put five on target. The Revolution placed just one shot on target — Adam Buksa’s left-footed long-range attempt in the 76th minute that was stopped by Johnson.

Moralez and Castellanos teamed up in the 31st minute for the first goal. Moralez lofted a pass over the pack to a speeding Castellanos, who was in free to send a header past Turner.

The referee initially wiped out the goal, citing Castellanos was offside, but a video review displayed that the goal was valid. 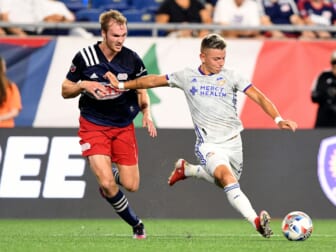 The duo were at it again in the 55th minute. This time, Moralez delivered a stellar cross from the right wing. Castellanos was streaking toward the goal and volleyed the ball past Turner to make it 2-0.

New England’s best first-half scoring chance came in the 24th minute when Buksa snapped a close-range header. But NYCFC’s Jesus Medina immediately blocked the shot with his own head and the ball went just right of the net.