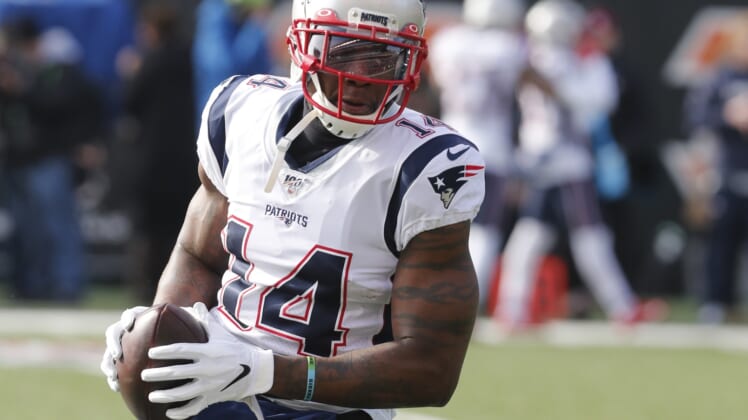 The New England Patriots traded a 2020 second-round pick for Mohamed Sanu during the 2019 season, hoping he would be a huge boost for their passing attack. Less than a year later, he could be in jeopardy of not making the Patriots’ roster.

New England sent the No. 55 pick to the Atlanta Falcons just days before the NFL trade deadline. It was a big move by Bill Belichick, but it came with underwhelming results and the organization could now take a drastic step.

The Patriots, like all 32 NFL teams, don’t have the benefit of preseason games to help with roster decisions this season. New England will kick off its 2020 schedule on Sept. 13 against the Miami Dolphins with major changes to the roster, including one potential surprise.

In his latest 53-man roster projection, ESPN’s Mike Reiss doesn’t have Sanu sticking with the Patriots when the 2020 season begins. Instead, the veteran receiver would lose his spot to young pass-catchers like Damiere Byrd, Gunner Olszewski and Devin Ross.

While it’s only a projection, Reiss is one of the most recognized and trusted reporters who covers the Patriots. We also know Belichick won’t hesitate to cut any player who he doesn’t think deserves a spot, no matter who they are.

Cutting Sanu less than a year after giving up a top-60 pick in a loaded 2020 draft class would mean acknowledging a brutal blunder. New England took a chance on Sanu, who wasn’t productive during the 2019 season even before the trade.

Sanu signed a five-year, $32.5 million contract with the Falcons before the 2016 season. Playing alongside Julio Jones, he was very productive in a complementary role. Sanu’s stats continued to climb, leading to a career-high 838receiving yards and averaging 12.7 yards per catch in 2018 with the Falcons.

However, things went south this past season. Across seven games in Atlanta, he averaged just 9.5 yards per catch and finished with only 313 receiving yards on 42 targets. Shortly after being traded to New England, he suffered a high-ankle sprain and never made the impact Belichick hoped for.

Sanu’s stats at the end of the 2019 season were underwhelming, compiling 59 receptions for 520 receiving yards and two touchdowns.

The Patriots likely thought he could be a bounce-back candidate this year after making a full recovery from the ankle sprain. With training camp drawing to a close, it’s evident they don’t feel that same level of confidence.

Sanu is owed $6.5 million this season in the final year of his contract. If the Patriots are done with him and can’t find a suitor on the trade market, the 31-year-old receiver would likely generate interest in free agency.