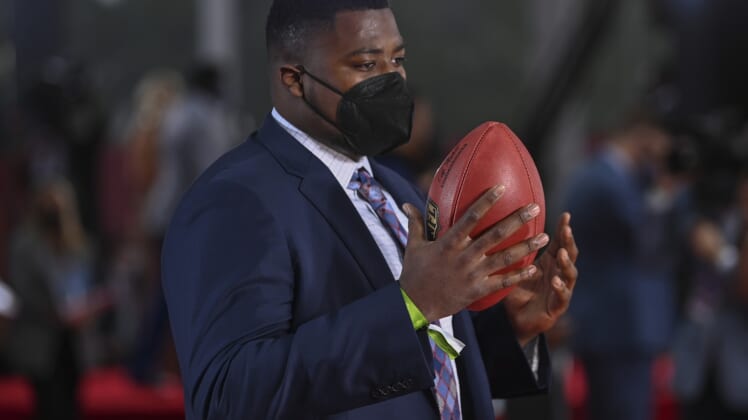 Apr 29, 2021; Cleveland, OH, USA; Alabama defensive lineman Christian Barmore holds a football as he appears on the Red Carpet at the Rock & Roll Hall of Fame before the first round of the 2021 NFL football draft, Thursday, April 29, 2021, in Cleveland. Mandatory Credit: David Dermer/Pool Photo-USA TODAY Sports

The New England Patriots have made a trade in the second round of the 2021 NFL Draft, adding one of the top available players remaining on the draft board at a position of need.

New England moved up from the 46th selection to No. 38 overall with the Cincinnati Bengals to select former Alabama stud defensive tackles Christian Barmore. In the process, New England yielded two fourth-round picks.

The defensive tackle position in the 2021 NFL Draft is seen as incredibly weak. That’s why most expected this former Alabama star to find himself selected in Round 1. In fact, Barmore headed to Cleveland to be in the green room for the annual event. As oddsmakers predicted, he was the last prospect in said room standing.

This comes on the heels of some pre-draft chatter indicating that the 6-foot-5, 310-pound interior lineman was hard to coach up and “resistant to structure,” whatever that means.

What we do know is that Barmore is an absolute force in the trenches. He’s agile for his size, plays with great pad level and can be dominant at the point of contact.

The New England Patriots got a steal here, adding to an interior of the defensive line that’s thin with the likes of Lawrence Guy and Byron Cowart slated to start in 2021.