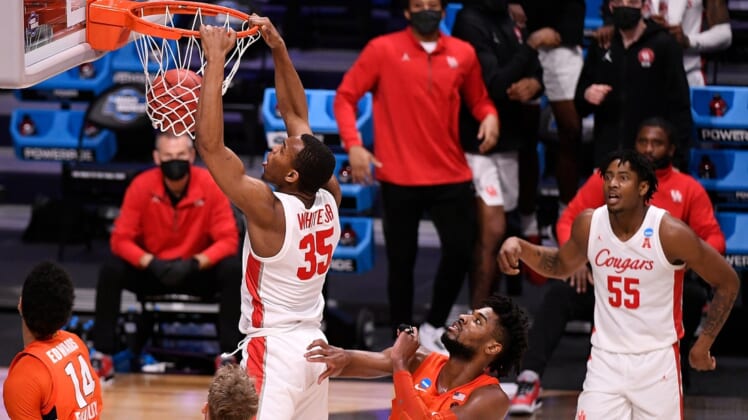 Ethan Thompson scored a game-high 22 points and Warith Alatishe registered a double-double of 10 points and 11 rebounds to lift 12th-seeded Oregon State to a 65-58 victory against No. 8 Loyola Chicago in an NCAA Tournament Midwest Regional semifinal on Saturday in Indianapolis.

The Beavers sit one victory away from the program’s first Final Four since 1963. They are only the second 12th seed to make it to the Elite Eight.

Defense continues to bolster the Beavers (20-12), who have limited foes to 31.3 percent shooting (57 of 182) in their three tournament victories.

Three years removed from a Cinderella surge to the Final Four, the Ramblers (26-5) saw their March run end as they finished a meager 33.3 percent (18 of 54) from the field, including 5-for-23 from 3-point range.

The Cougars (27-3) will face 12th-seeded Oregon State at Lucas Oil Stadium on Monday for a berth in the Final Four. Houston last reached the Elite Eight in 1984 when it eventually lost to Georgetown in the national title game.

Houston excelled defensively against the Orange (18-10), limiting Syracuse to its lowest point total in NCAA Tournament history. The Orange shot just 28 percent overall and missed 18 of 23 3-pointers, with leading scorer Buddy Boeheim finishing with 12 points on 3-of-13 shooting.

Jermaine Samuels led Villanova with 16 points while Justin Moore added 15 and Jeremiah Robinson-Earl had eight points and 12 rebounds. Without Collin Gillespie, who tore his MCL on March 3, the Wildcats (18-7) committed 16 turnovers.

Third-seeded Arkansas (25-6) advanced to the Elite Eight for the first time since 1995 when they were the national runner-up a year after winning the school’s lone national championship. The Razorbacks will take on top-seed Baylor in the South Region final on Monday night.

Oral Roberts (18-11), the second-ever No. 15 seed to advance to the Sweet 16, came up just short of becoming the first such seeded team to reach the Elite Eight as Max Abmas missed a 3-pointer as time expired. Abmas scored 25 points.