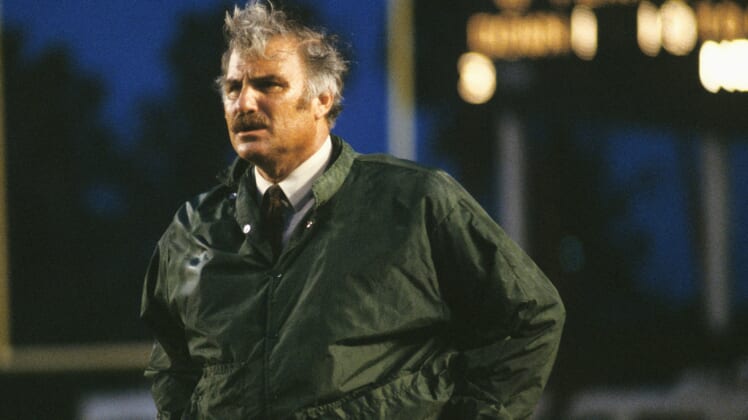 MIAMI, FL – NOVEMBER 1981: Coach Howard Schnellenberger of the University of Miami Hurricanes during a game against the Penn State Nittany Lions in November 1981 in Miami, Florida. (Photo by Ronald C. Modra/Getty Images)

Howard Schnellenberger, who rose to prominence as the architect of the Miami Hurricanes dynasty in the 1980s, died Saturday at the age of 87, his family announced.

No cause of death was given in the statement, which was released through Florida Atlantic University, whose football program he pioneered.

“Howard treated me special, like a queen, and was truly a husband that every Canadian girl dreams of,” his wife, Beverlee Schnellenberger, said in the statement. “You will always be my love, now and forever. I’m proud to be your wife. You were a great leader of men and the leader of our lives.”

The Schnellenbergers had been married for 62 years.

Schnellenberger was the offensive coordinator for the Miami Dolphins for their perfect season in 1972 and again from 1975-78, before leaving to become the head coach of the Miami Hurricanes in 1979.

He quickly turned the floundering Hurricanes program into a national force, culminating in a championship in 1983. While it was his last season with the team, he left behind a young nucleus that helped pave the way for Jimmy Johnson’s title team in 1987 and sparked a run of five national titles in 19 seasons.

“Howard Schnellenberger leaves behind a legacy more impactful than he’ll ever know. Our thoughts are with his family and friends.”

He left Miami for what turned out to be a brief flirtation with the USFL, and Schnellenberger later landed at the University of Louisville in his hometown in 1985. He turned a moribund Cardinals program into a contender in his 10 seasons in Louisville, leading them to their third and fourth bowl victories in school history.

His final coaching job was at FAU, where he started the Owls program from scratch in 2001. After just four seasons at the FCS level, FAU jumped to Division I play in the Sun Belt Conference.