Thursday’s early action got the 2016 NCAA Tournament off to a roaring start with some surprising results.

Duke (No. 4) got past some early jitters to sneak past a feisty UNC Wilmington squad (No. 13) that led by three after the first half in the West Region. A bit later in the afternoon, Baylor (No. 5) was ousted in the first round by Ivy League representative Yale (12), which came strong all game long.

We’re examining these results and others from early Thursday. Here is a quick look at all the final results heading into the evening’s big games.

Now let’s dive into what went down during the biggest early games from Thursday.

Marshall Plumlee busts out with big second half against UNC Wilmington

The score heading into halftime was 43-40, and Duke’s offense wasn’t clicking. Marshall Plumlee looked like a shell of himself, and an upset special appeared to be brewing in Providence, R.I.

Then Plumlee ripped off his protective mask early in the second half in frustration, and the Blue Devils suddenly came alive.

Marshall Plumlee took his mask off and became an unstoppable monster: https://t.co/AOwNniXxiu pic.twitter.com/BPMjq7SNyb

Sparked by Plumlee’s monster second half (he scored a career-high 23 points total), Duke outscored the Seahawks by 11 points en route to a comfortable 93-85 win to advance into the second round.

Plumlee was understandably frustrated with his early performance and expressed as much after the game, via the Associated Press:

“There’s no excuses for my play in the first half,” Plumlee said afterward in the quiet Duke locker room, wearing a blue jersey with the words “Be Worthy” emblazoned on the front.

Needless to say, Plumlee was “worthy” to wear the Duke jersey Thursday. Sophomore guard Grayson Allen matched Plumlee’s 23 points for the Blue Devils, scoring 15 points on 15-of-17 shooting from the free-throw stripe. Allen also added 10 rebounds and five assists, putting together an impressive outing all around.

For the Mariners, Craig Ponder led the scoring charge with 22 points. Three others scored at least 16 points for UNC Wilmington, which simply didn’t have enough depth to compete with the national powerhouse.

Now the Blue Devils will play against Ivy League school Yale in Round 2 after the Bulldogs knocked off the Baylor Bears Thursday afternoon.

Iowa State’s consistent offensive production too much for Iona

Georges Niang pours in 28 points to help Iowa State advance to the 2nd round with 94-81 victory over Iona. pic.twitter.com/DgN2c5jI0L

Nobody predicted Iona (No. 13) to beat Iowa State (No. 4), and it could be argued the Gaels actually did better than expected, losing by just 13 points.

The Cyclones got hot from the field and stayed hot all game long, converting half their shots from the floor and 45.5 percent from behind the arc (10-of-22).

Iona senior guard A.J. English made the most of his final chance for tournament glory, pouring in 28 points of his own with seven rebounds and six assists.

Despite a valiant effort in the second half, the Gaels simply didn’t have the firepower to score with the hot-shooting Cyclones. A lack of three-point shooting hurt them, as only seven of their 24 attempts from behind the line fell through the net.

The Cyclones will now await the winner of the Purdue (No. 5) contest against Little Rock (No. 12) happening at the time of this writing. 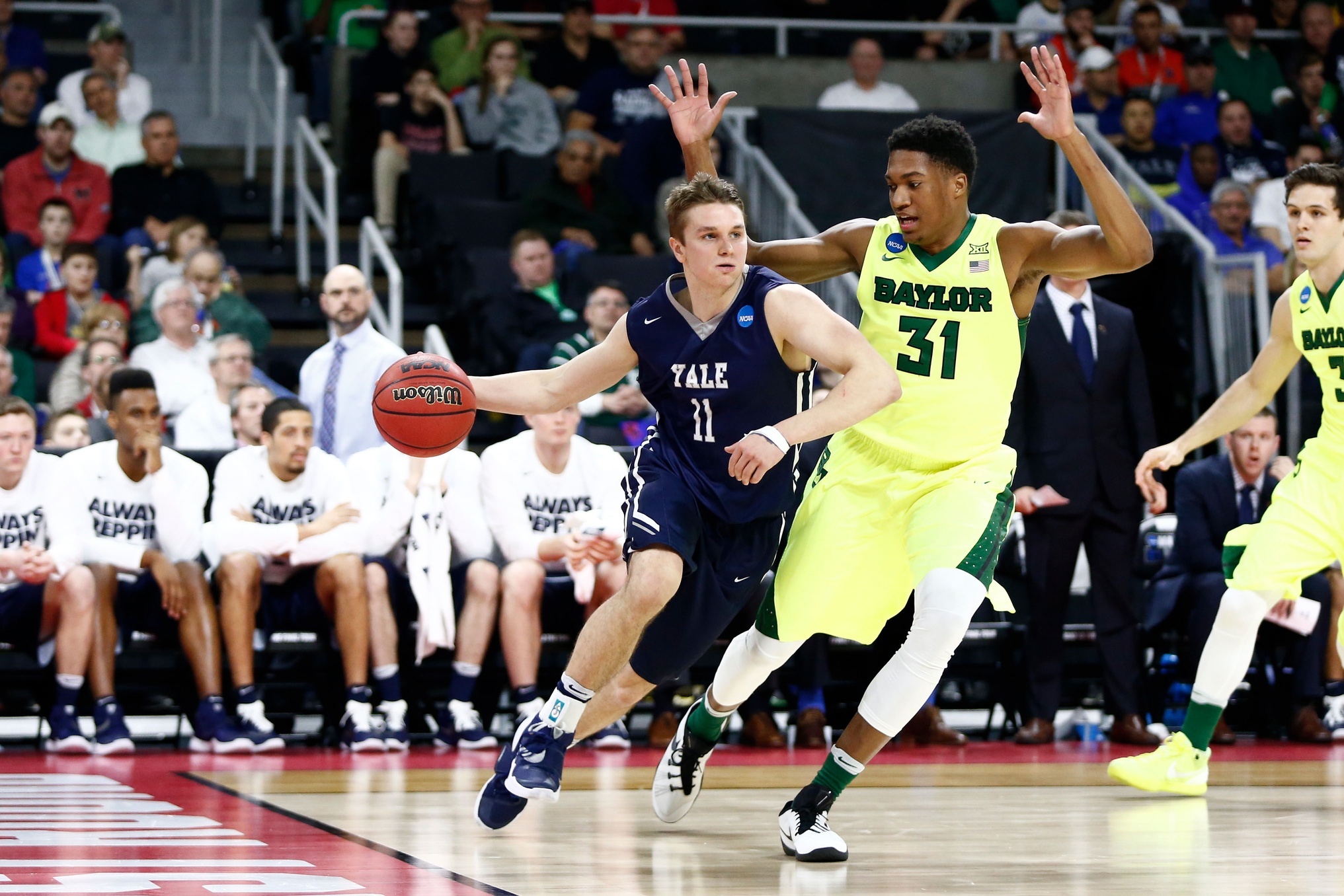 Nobody saw this coming.

That said, it seems like every year we see a No. 12 seed take out a No. 5, and Yale was the Cinderella winner on Thursday against the Baylor Bears.

The Bears were frustrated throughout the contest by Yale’s feisty defense and managed to convert just 44.1 percent from the floor. They also struggled to gain any traction from the free-throw stripe in front of the pro Yale crowd in Providence, R.I., hitting just 60 percent (nine-of-15) from the line.

While Baylor found scoring a difficult proposition, Yale, and in particular guard Makai Mason, tore it up. Mason scored 31 points, adding six rebounds and four assists, hitting on all 11 of his free-throw attempts. Forward Justin Spears added 18 points as a second fiddle to his electric teammate.

As mentioned above, Yale will now have to take down Duke to continue writing its Cinderella story. The task won’t be easy, but after watching the Blue Devils slip during the first half against UNC Wilmington it’s clearly not an impossible challenge.