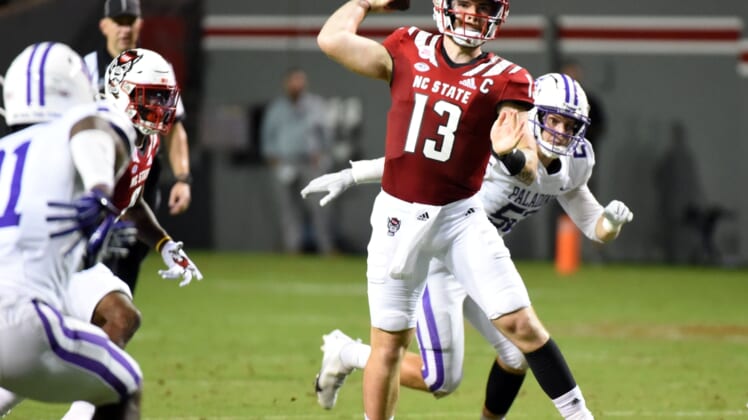 Devin Leary threw for three touchdowns and ran for another in a solid first half in North Carolina State’s 45-7 victory against visiting Furman on Saturday night in Raleigh, N.C.

Running back Zonovan Knight rushed for 104 yards on 11 first-half carries with one touchdown as the Wolfpack (2-1) bounced back after a rough loss a week earlier at Mississippi State.

NC State cranked out a 505-196 advantage in total yards in tuning up for next week’s visit from reigning the Atlantic Coast Conference champion, No. 6 Clemson.

Furman (2-1), which entered the game with its first 2-0 record since 2014, trailed 38-0 at halftime. Quarterback Hamp Sisson was 8-for-19 for 86 yards, including a 16-yard touchdown pass to Ryan Miller late in the third quarter.

Knight’s 1-yard run opened the scoring on the Wolfpack’s second possession. He racked up 56 yards on the ground on the drive.

Christopher Dunn’s 32-yard field goal later in the first quarter made it 10-0, and NC State’s next five touchdown drives all lasted less than three minutes.

Leary threw 4 yards to Dylan Parham, who made a diving catch in the back of the end zone, for the first points of the second quarter.

Leary ran 7 yards for the next touchdown. His 42-yard touchdown pass to Anthony Smith and 12-yard strike to Thayer Thomas rounded out the Wolfpack’s 28-point second quarter.

Ricky Person Jr. had a 1-yard touchdown run with 10:53 left in the third quarter.

The Paladins were held to 49 yards of total offense in the first half, when they were 0-for-7 on third-down conversions.

Furman is ranked No. 25 in the Football Championship Subdivision coaches’ poll. The Paladins have lost six consecutive meetings against Football Bowl Subdivision opponents, including a 2017 blowout loss to NC State.