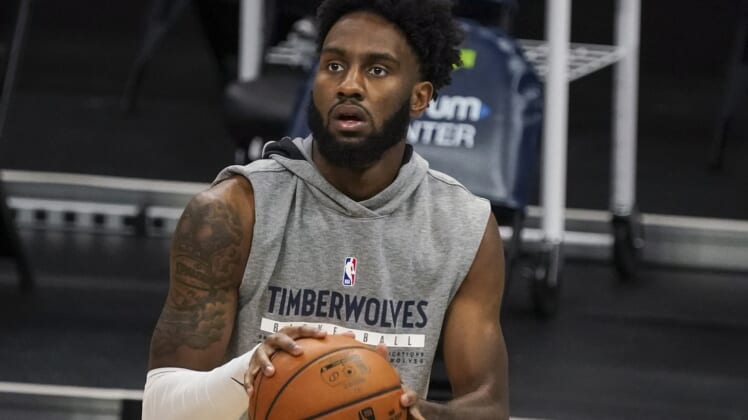 The NBA on Thursday suspended Minnesota Timberwolves guard Malik Beasley 12 games without pay for pleading guilty to a felony charge of threatening a family with a rifle.

He will begin serving the suspension Saturday when the Timberwolves visit the Washington Wizards.

Timberwolves president of basketball operations Gersson Rosas released a statement regarding the suspension.

“As an organization, we fully support today’s decision by the NBA. As we work together with Malik to advance his development as a player and a person, we look forward to seeing his growth,” Rosas said.

The incident occurred on Sept. 26, 2020, when a couple and their 13-year-old child stopped in front of Beasley’s home in Plymouth, Minn. Authorities said the family was on a tour of homes in his neighborhood and they were looking for another house when Beasley came outside, pointed a firearm and told them to leave his property.

On Dec. 21, Beasley pleaded guilty to a felony charge of threatening to commit a crime of violence for the purpose of terrorizing another person. Earlier this month, he was sentenced to 120 days in jail, to be served after the NBA season.

Beasley, 24, will serve out his sentence at the county workhouse or home confinement. In exchange for his plea, prosecutors dropped a felony fifth-degree charge of drug possession.

As part of Beasley’s three-year probation, he is not allowed to possess a firearm and cannot drink alcohol or use illicit drugs. He must also complete anger management and pay a $3,000 fine. Adhering to those terms will result in the felony conviction being reduced to a misdemeanor.

Police found three firearms, including an assault rifle, as well as more than 42.5 grams of leafy marijuana, the district attorney’s office said. Marijuana in that form is illegal in the state.

Beasley’s sentence is tentatively set to begin May 26, depending on the end to the NBA season due to potential disruptions due to COVID-19.

Beasley is averaging 20.5 points and 4.6 rebounds per game in 33 games this season. The Timberwolves retained Beasley on a four-year, $60 million agreement in November.