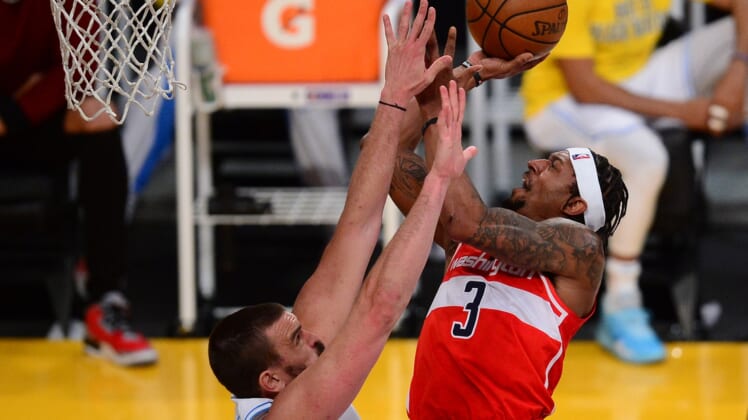 Bradley Beal scored 33 points and Russell Westbrook added 32 on Monday as the visiting Washington Wizards rallied for a 127-124 overtime victory over the Los Angeles Lakers for their first five-game winning streak in three years.

Westbrook, who added 14 rebounds and nine assists, made a shot inside and was fouled with 11.6 seconds remaining in overtime to put the Wizards up three points. He missed the ensuing free throw to give the Lakers a chance to tie the score, but LeBron James and Kyle Kuzma missed 3-point attempts on Los Angeles’ final possession.

James finished with 31 points, 13 assists and nine rebounds while Montrezl Harrell added 26 off the bench as the Lakers lost three consecutive games for the first time this season.

Donovan Mitchell finished with 23 points and eight assists and three Utah teammates scored at least 20 points each off the bench in the Jazz’s win over Charlotte in Salt Lake City.

Joe Ingles and Georges Niang scored 21 apiece, with all of their points coming via 14 3-pointers, and Jordan Clarkson added 20 points with five treys as the Jazz won for the 21st time in 23 games. The Jazz hit a franchise-record 28 3-pointers (one shy of the NBA record) on 55 attempts.

Rookie LaMelo Ball and former Jazz star Gordon Hayward each scored 21 points for the Hornets, who were opening a six-game road trip.

Kendrick Nunn scored 20 points for the Heat while Bam Adebayo had 19 points and 13 rebounds. Jimmy Butler added 15 points and nine assists but shot was just 3 of 11 from the floor.

Shai Gilgeous-Alexander led the Thunder with 27 points, going 10 of 15 from the floor, and added five assists. Darius Bazley had 13 points.

Devin Booker scored 34 points on 12-of-17 shooting as Phoenix rolled to a victory over visiting Portland.

Deandre Ayton added 19 points as the Suns notched their 12th victory in the past 14 games. Phoenix turned the game into a blowout by outscoring the Trail Blazers 37-17 in the third quarter.

Dallas put eight days’ worth of stored energy into one of its best defensive performances of the season, limiting visiting Memphis to its second-lowest season point total.

Tim Hardaway Jr. came off the bench to score a game-high 29 points (20 in the first half) as the Mavericks, who hadn’t played since Valentine’s Day because of two weather-related postponements, won for the fifth time in their past six games.

Ja Morant had a team-high 22 points and game-high nine assists for the Grizzlies, who were playing for the third time in four nights. The loss was their second straight.

Zach LaVine scored 14 of his 21 points in a runaway third quarter as visiting Chicago rolled over reeling and short-handed Houston.

After scoring just seven points prior to halftime, LaVine spearheaded a scorching third period for the Bulls by shooting 5 of 5 from the floor, including three 3-pointers. He scored 11 consecutive points for Chicago during one surge, leading the Bulls to a season-best 46-point frame.