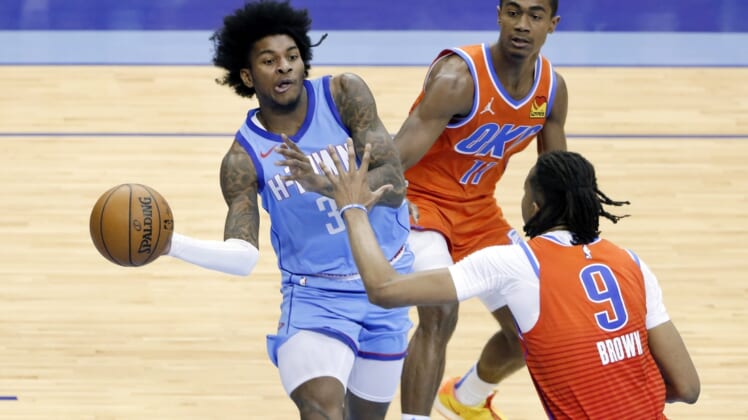 Kevin Porter Jr. scored a career-high 50 points and was one of three Houston players to post double-doubles as the Rockets upset the visiting Milwaukee Bucks 143-136 on Thursday.

Porter added 11 assists, Christian Wood finished with 31 points and nine rebounds and Kelly Olynyk paired 24 points with 13 rebounds for Houston. D.J. Wilson, acquired from Milwaukee in the deal that sent P.J. Tucker to the Bucks at the trade deadline, added 15 points and 12 rebounds for the Rockets.

Khris Middleton led the Bucks with 33 points, and Bryn Forbes added 30 on 6-of-10 3-point shooting off the bench. Jrue Holiday tallied 29 points and 10 assists for the Bucks.

Tim Hardaway Jr. poured in a career-high 42 points and Dallas edged away from host Detroit. Hardaway shot 13-for-23 from the field, including six 3-point makes, and knocked down all 10 of his free throws.

Trey Burke scored 15 points off the bench for the Mavericks. Dallas star guard Luka Doncic sat out with a left elbow contusion, while the Pistons held out several regulars, including starters Jerami Grant and Mason Plumlee. Mavs big man Kristaps Porzingis left the game in the third quarter with right knee soreness after scoring 11 points.

Rookie Isaiah Stewart scored a career-high 20 points and pulled down 10 rebounds for Detroit. Frank Jackson had 20 points off the bench.

The Nuggets, who had seven players score in double figures, earned their fourth win in a row.

OG Anunoby scored 25 points while Kyle Lowry and Khem Birch added 20 apiece for Toronto. The Raptors played without guard Fred VanVleet due to a hip injury.

Kevin Durant shot 16 of 24 from the floor en route to matching his season-high of 42 points, Alize Johnson recorded 20 points and a career-high 21 rebounds, and Brooklyn completed a season sweep of Indiana in Indianapolis.

All five Nets starters scored in double-figures, with Jeff Green, Joe Harris and Landry Shamet all hitting for 14 points and Tyler Johnson adding 11. Kyrie Irving sat out due to a groin ailment.

The Pacers got 36 points from Caris LeVert, who produced a 5-of-9 performance from 3-point range.

Karl-Anthony Towns scored 22 points and came through during a crucial fourth-quarter stretch, propelling Minnesota over visiting Golden State in Minneapolis.

Stephen Curry finished with a game-high 37 points and a team-high eight assists for the Warriors.

The Pelicans, who won for the third time in five games, moved within three games of the No. 10 spot in the Western Conference with the win and Golden State’s loss at Minnesota. The Thunder lost for the 15th time in 16 games.

Brandon Ingram added 24 points for the Pelicans, who were just 5 of 29 on 3-point attempts but scored 64 points in the paint. Luguentz Dort led the Thunder with 17 points.