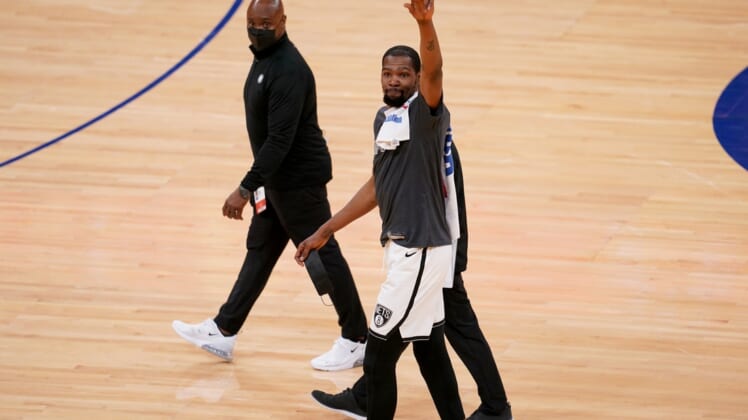 Kevin Durant scored 20 points in his return to the San Francisco Bay Area and Brooklyn’s “Big Three” were firing on all cylinders Saturday night as the Nets opened a Western Conference swing with a 134-117 victory over the host Golden State Warriors.

Kyrie Irving paced the Nets with 23 points, and James Harden complemented a game-high 16 assists with 19 points, helping Brooklyn complete a dominant season-series sweep from the Warriors.

Stephen Curry led all scorers with 27 points but shot just 2-for-9 from 3-point range as the Warriors misfired on 25 of their 34 3-point attempts. Andrew Wiggins and Kelly Oubre Jr. backed Curry with 17 points apiece as the Warriors saw a two-game winning streak end.

In the opener of a five-game trip, the Nets led by 15 at halftime, then busted the game open with a 42-point third quarter during which Irving had nine points and Durant eight while Harden assisted on six buckets and bombed in a pair of 3-pointers.

Aaron Holiday came off the bench to score a season-high 18 points and help visiting Indiana erase a nine-point, fourth-quarter deficit and defeat Atlanta.

Holiday was the catalyst of a 31-9 run, scoring 11 of his 16 second-half points in the final 7:23. Indiana’s top scorer was Doug McDermott with 26 points. Myles Turner finished with 19 points and 10 rebounds, and Malcolm Brogdon added 18 points and eight assists.

Clint Capela had 24 points and 10 rebounds for Atlanta, and Danilo Gallinari came off the bench to score 20. John Collins and Cam Reddish each scored 18. Trae Young had 15 points and 14 assists, playing through an injury to his right thumb that required trainers to tape it at halftime.

Mitchell scored eight points in a decisive third quarter as Utah turned a five-point halftime lead into a 21-point advantage. The Jazz outscored the Heat 31-15 in that period.

Kendrick Nunn topped Miami with 23 points while Jimmy Butler and Max Strus each had 15 points. The Heat had their four-game winning streak snapped on the second stop of their seven-game Western Conference swing.

Joel Embiid led Philadelphia with 35 points and eight rebounds while Ben Simmons added 18 points and six rebounds for the Sixers, who have lost two straight.

John Wall finished with a game-high 26 points while Eric Gordon chipped in 24 points for the Rockets, who made only 8 of 43 3-point attempts while shooting 37.5 percent overall. DeMarcus Cousins added 10 points and 10 rebounds for Houston, which played without starters Christian Wood (ankle) and Victor Oladipo (foot).

NBA trade rumors: Latest buzz from around the league