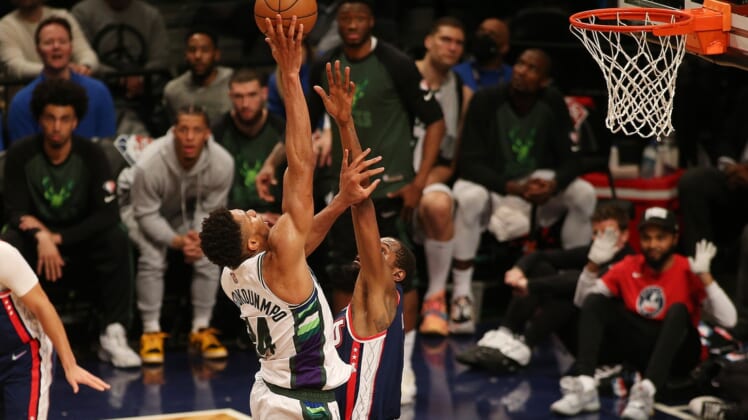 Giannis Antetokounmpo scored 44 points, hit the tying 3-pointer with 18.7 seconds left in regulation and sank the tiebreaking free throws with three seconds left in overtime as the Milwaukee Bucks outlasted the Brooklyn Nets 120-119 on Thursday night in New York.

Antetokounmpo made 14 of 21 shots and his lone 3-pointer of the game moved him past Hall of Famer Kareem Abdul-Jabbar atop Milwaukee’s all-time scoring list. He also added 14 rebounds and six assists to help Milwaukee win for the 12th time in 15 games.

Durant collected 26 points and 11 assists for the Nets, who lost for the third time in four meetings with Milwaukee this season. Kyrie Irving added 25 and Brown contributed 23 as Brooklyn shot 46.4 percent and hit 18 3-pointers.

Jordan Clarkson added 19 points off the bench against his former team and Mike Conley scored 18 to help the Jazz beat the Lakers for the first time in three meetings this season. Bojan Bogdanovic finished with 11 points and five assists in his return after being sidelined during 10 of the previous 11 games due to a strained left calf.

DeMar DeRozan scored 10 of his season-high 50 points in overtime as Chicago rallied from a 16-point, second-half deficit to beat visiting Los Angeles.

DeRozan’s dunk with three seconds left in OT sealed the comeback victory for Chicago, which never trailed in overtime after falling behind by 11 with 4:58 left in regulation.

Cade Cunningham had 27 points, six assists and four steals and host Detroit held Philadelphia to 15 points in the fourth quarter.

Saddiq Bey had 20 points for Detroit, which snapped a three-game losing streak, while Kelly Olynyk contributed 12 points, four rebounds and three assists. Killian Hayes added 10 points and three steals and Isaiah Livers tossed in nine points for the Pistons, who never led until the fourth quarter.

Joel Embiid carried the Sixers with 37 points and 15 rebounds, but he also committed seven turnovers. James Harden had 18 points, nine rebounds and seven assists but shot 4-for-15 from the field. Tobias Harris had 14 points and Tyrese Maxey chipped in 13.

Trae Young put up 30 points and nine assists to help Atlanta win its fourth straight game and clinch at worst a spot in the Eastern Conference play-in tournament with a win over visiting Cleveland.

Cleveland was led by Cedi Osman, who came off the bench to score 21. Darius Garland added 18 points and eight assists as the Cavaliers fell for the sixth time in seven games.