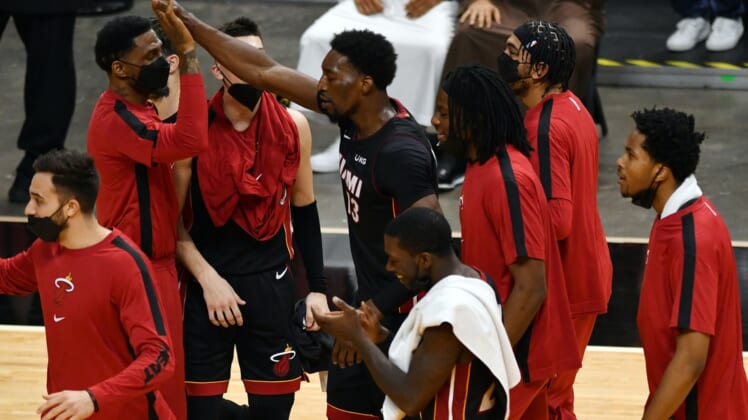 Bam Adebayo’s step-back, 13-foot jumper from the baseline at the buzzer lifted the Miami Heat to a 109-107 victory at home against the Brooklyn Nets in a matchup of short-handed teams on Sunday afternoon.

Adebayo finished with 21 points, 15 rebounds and five assists to help the Heat snap a three-game losing streak despite playing without Jimmy Butler, who sat out with a sprained right ankle.

Landry Shamet scored a career-high 30 points and made 7-of-12 3-pointers to lead the Nets, who lost Kevin Durant early to injury and were already without James Harden (hamstring). Durant scored the Nets’ first eight points before exiting the game with 7:57 left in the first quarter with what was diagnosed as a left thigh contusion.

Goran Dragic finished with 18 points, eight rebounds and seven assists and Dewayne Dedmon totaled 10 points and 10 rebounds off Miami’s bench. Kendrick Nunn made five of the Heat’s 16 triples and finished with 17 points while Ariza had 15 points and nine rebounds.

Trae Young collected 34 points and 11 assists and Atlanta used a fast finish to secure a win over visiting Indiana.

Clint Capela recorded 25 points and 24 rebounds while Kevin Huerter and Bogdan Bogdanovic each had 23 points for the Hawks, who have won eight of their past 10 games.

Indiana received 29 points and eight assists from Malcolm Brogdon and 18 points and 14 rebounds from Domantas Sabonis. T.J. McConnell came off the bench to score 18 points.

Randle added five steals, Derrick Rose scored 23 off the bench and RJ Barrett had 18 as the Knicks defeated the Pelicans for the second time in their past three games.

Zion Williamson had 34 points, nine rebounds and five assists for the Pelicans, while Eric Bledsoe scored 22 points and Brandon Ingram added 19. Steven Adams had 10 points and 14 rebounds as New Orleans lost in overtime for the second consecutive game.

Los Angeles backed up its standing as the top 3-point shooting team in the NBA, making half of its 42 attempts from long range in routing visiting Minnesota.

The Clippers, who began the night hitting 42 percent from distance, had 104 points by the end of the third quarter. Paul George led the Clippers with 23 points and added seven rebounds. Kawhi Leonard returned to the Clippers’ starting lineup after a four-game absence due to a foot injury and finished with 15 points, 11 rebounds and eight assists in 23 minutes.

Rozier, who took 24 of the Charlotte starters’ combined 53 shots from the field, racked up seven 3-point baskets on 13 tries. He also delivered a team-best 10 assists to go with eight rebounds. P.J. Washington also contributed 23 points, eight rebounds and four blocked shots off the bench for Charlotte.

Carmelo Anthony pumped in 24 points and C.J. McCollum posted 22 points for Portland. It was the second straight game for the Trail Blazers without injured team scoring leader Damian Lillard. Unlike two nights earlier in a one-point win at San Antonio, the Trail Blazers were unable to overcome his absence this time.

De’Aaron Fox poured in a team-high 30 points and Sacramento was never threatened after scoring the game’s first eight points while earning a victory over host Dallas to end a nine-game losing streak.

Fox had a double-double with a game-high 12 assists, as did Hassan Whiteside with 12 points and a team-high 10 rebounds as the Kings won for the first time since March 29. Fox hit 12 of his 21 shots from the field en route to his 17th 30-point outing of the season. The double-double was his 11th of the year.

Luka Doncic had a game-high 37 points for the Mavericks in the loss. Doncic shot 14 of 27 from the field while making four 3-pointers. Dorian Finney-Smith had 22 points and Jalen Brunson added 20 for the Mavericks, who have opened a five-game homestand with consecutive defeats.

Chris Boucher scored 17 of his 31 points in the first quarter and grabbed 11 rebounds as host Toronto defeated reeling Oklahoma City at Tampa.

Boucher scored 10 points in the final three minutes of the game as the Raptors won their third in a row while extending the Thunder’s losing streak to a season-long 10 games. Boucher made a career-high six 3-pointers.

Gary Trent Jr. added 23 points for the Raptors and Malachi Flynn had 15. Luguentz Dort scored 21 of his 29 points in the first quarter for the Thunder, while Darius Bazley added 16 points and Kenrich Williams had 12.

Wood finished with 25 points and 10 rebounds. His 10-foot jumper with 39.9 seconds left extended Houston’s lead to five, but Magic rookie Cole Anthony made a 3-pointer and a driving layup. Olynyk and Avery Bradley then sealed the win at the line.

Kevin Porter Jr. added 22 points and seven assists for the Rockets. Armoni Brooks scored 16 points on 5-of-6 3-point shooting off the bench. Dwayne Bacon finished with 22 points and three steals for the Magic, losers of eight of their last nine. Anthony and Gary Harris added 16 points apiece.