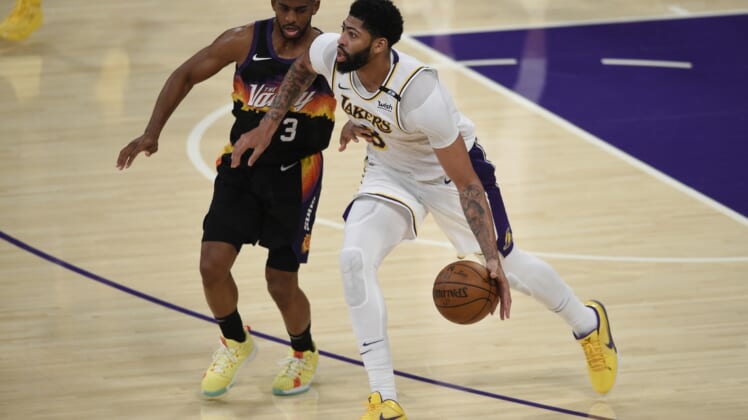 Anthony Davis had 42 points and 12 rebounds and the Los Angeles Lakers made 13 shots from 3-point range to overwhelm the Phoenix Suns in a 123-110 win on Sunday night in Los Angeles.

Los Angeles avoided the three-game season sweep by Phoenix and remained one game behind the Portland Trail Blazers for the No. 6 spot in the Western Conference standings with four games left. The top six teams avoid the play-in tournament to reach the playoffs.

Los Angeles, which lost eight of its previous 10 games, was without LeBron James, Kyle Kuzma and Dennis Schroder. After being out six weeks because of an ankle injury, James has missed the last four games with the same injury.

Devin Booker finished with 21 points for the Suns, but he made only 5 of 14 shots from the field and missed his only 3-point attempt. Chris Paul had 13 points and 10 assists.

Jimmy Butler finished strong with 22 of his 26 points in the second half as Miami strengthened its hold on the sixth seed in the Eastern Conference with a win over host Boston.

Despite Butler having only four points at halftime, the Heat managed to build a 26-point lead to help hold off Boston’s fourth-quarter push. Butler also contributed 11 assists and eight rebounds.

Duncan Robinson scored 22 points, Bam Adebayo added 20 and Trevor Ariza scored all but two of his 19 points in the first half for the Heat.

Karl-Anthony Towns and D’Angelo Russell each had 27 points to lead Minnesota to a blowout win, marking just the second time the Timberwolves have won in its previous 12 games in Orlando.

The Timberwolves snapped a three-game losing streak and improved to 7-5 over their past 12 games. The Magic dropped their third in a row in their home finale and went 11-25 in Orlando this season.

It was an emotional Mother’s Day victory for Towns, Minnesota’s two-time All-Star, who lost his mother to COVID-19 last year. Towns, who also had nine rebounds and four assists, helped jump-start the Timberwolves as they used an early run to overwhelm the Magic and outscore them 74-44 by halftime.

Derrick Rose contributed 25 points and eight assists off the bench and Reggie Bullock finished with 24 points on 5-for-12 shooting from behind the arc as visiting New York defeated Los Angeles.

RJ Barrett added 18 points and seven rebounds and Julius Randle chipped in 14 points and 14 rebounds. Kawhi Leonard topped the Clippers with 29 points but struggled finding his shooting stroke, finishing 9-for-26 (34.6 percent) from the field.

With the win, New York remained the No. 4 seed in the Eastern Conference, while the Clippers maintained their grip on the No. 3 seed in the West despite the loss.

Jaxson Hayes of the Pelicans scored the only two field goals in the last 1:50 for either team before a 3-pointer from Charlotte’s Terry Rozier in the last second accounted for the final score. Rozier finished with 43 points, including 24 in the first half.

The Pelicans went ahead at 109-107 on Hayes’ alley-oop layup on a pass from Lonzo Ball. With 1:29 remaining, Charlotte’s LaMelo Ball missed two foul shots, allowing the Pelicans to retain their lead. Hayes soon scored again on a hook shot off a pass from Nickeil Alexander-Walker, making it a four-point New Orleans lead with just 12.7 seconds remaining and putting it away for good.

Chicago used a strong defensive effort to keep alive its slim prospects of making the Eastern Conference play-in tournament, moving to 2.5 games behind Indiana with four games left in the Bulls’ regular season.

The Bulls held Detroit — playing without season leading scorer Jerami Grant on the second leg of a weekend back-to-back — to just 39 first-half points and 36-of-78 shooting from the floor for the game.

Maurice Harkless and Terence Davis scored 18 points each to lead Sacramento to a home win over Oklahoma City.

The Kings kept their faint hopes of making the play-in tournament alive with the win, their fifth in six games. Sacramento is 2 1/2 games behind San Antonio for 10th in the Western Conference with four games to play.

The Kings had eight players score in double figures, including 15 each by Richaun Holmes and Delon Wright. Darius Bazley led Oklahoma City with 18 points while Jaylen Hoard had a career-high 16.

Tim Hardaway Jr. scored 25 points while hitting on 7 of his 11 3-point shots as surging Dallas defeated host Cleveland in the second game of a home-and-home set between the two teams.

The Mavericks won for the fourth straight game and are a season-best 12 games over .500. Dallas remained in fifth place in the Western Conference, moving a game in front of idle Portland in the standings with four games to play.