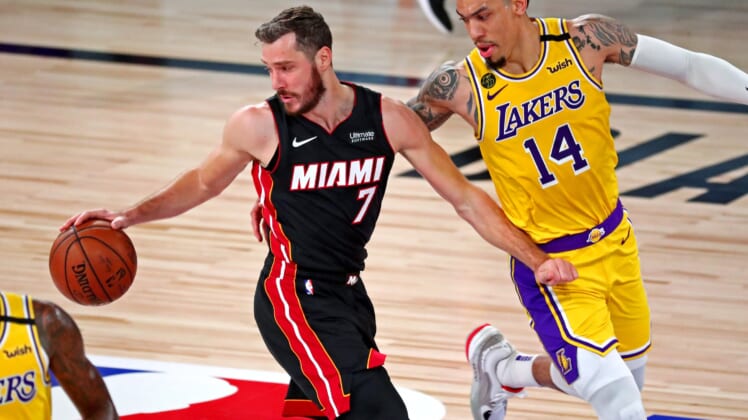 Coming off an ugly loss in Game 1 of the NBA Finals, the Miami Heat could be in serious jeopardy of facing a two-game deficit with point guard Goran Dragic and center Bam Adebayo doubtful for Game 2.

Dragic suffered a left foot injury in the first half of Game 1, while Adebayo exited in the second half. Neither player could return for the game and further evaluations have led to another unfortunate turn for Miami.

Following Wednesday’s loss, per ESPN’s Adrian Wojnarowski, Dragic was diagnosed with a plantar fascia tear in his left foot. While the injury would typically sideline a player for multiple weeks, Dragic hoped to return during the NBA Finals after being able to put weight on it.

After a night to recover, Miami released its injury report for Game 2. Dragic is currently doubtful to play on Friday night, with the injury widely expected to keep him out.

As ESPN’s Bobby Marks noted, we’ve seen players play through this exact injury before during the NBA Playoffs. Joe Johnson received an injection in his foot after suffering a torn plantar fascia in Game 2 of the 2013 playoffs. While he managed to play through the injury, he shot 25.6% from beyond the arc and went 2-of-14 in a Game 7 loss.

Dragic has played an integral role in Miami’s playoff run in the bubble. Coming out of Game 1, he was averaging 19.9 points, 4.6 assists and one steal per game. The veteran was also an effective shooter, sinking 45% of his shots from the field and 35.9% from three-point range.

If Dragic is sidelined, Kendrick Nunn will be asked to step into a much larger role. He averaged 15.3 points in his rookie season and scored 18, on 8-of-11 shooting, in his NBA Finals debut.

Not only is Miami facing the possibility of being without its starting point guard, but Adebayo is also likely to miss Friday’s game.

He was initially diagnosed with a shoulder strain after playing 21 minutes in the Game 1 defeat. It’s now being listed as a neck strain, which might keep him out for Game 2.

It would be another devastating blow for the Heat. Adebayo, an NBA All-Star and All-Defensive Second Team selection, took his game to another level in the playoffs. Miami desperately needs him to help contain Anthony Davis, who went off for 34 points, nine rebounds and three blocks in the series-opening win.

If Adebayo can’t play on Friday, Kelly Olynyk will likely step into the starting lineup. It would be another mismatch for the Lakers to take advantage of, staring down the chance to take a two-game lead in the series.