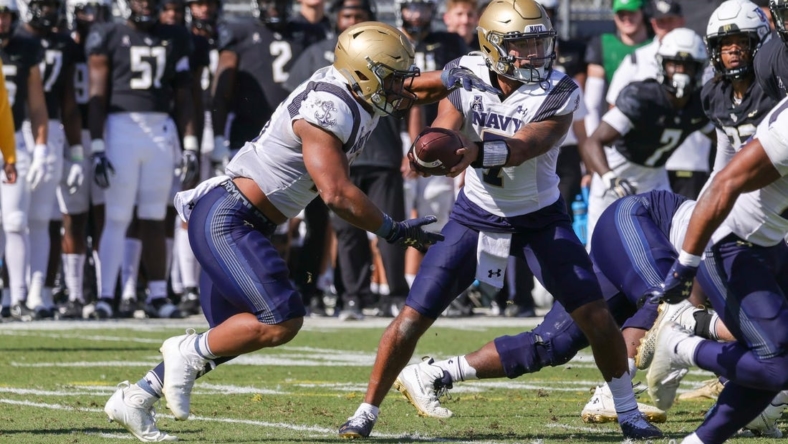 The Midshipmen (4-7) defeated UCF for the second straight season. Fofana fronted a Navy rushing attack that wound up with 248 yards on 63 carries.

UCF (8-3) entered Saturday as the highest-ranked Group of Five team in the College Football Playoff rankings. But Navy’s defense kept the Knights at bay and put a dent in their chances of reaching the AAC championship game.

Starting quarterback John Rhys Plumlee was ineffective in the first half and UCF replaced him at halftime with Mikey Keene looking to spark a comeback. Keene finished with 123 yards and a touchdown on 11-for-18 passing. Javon Baker caught six passes for 101 yards and a touchdown.

Navy was a perfect 4 for 4 on fourth-down conversions, including one on its final drive that chewed up the final 5:54 of game clock to secure the win.

Set up by a 46-yard dash by Fofana on the opening drive, quarterback Xavier Arline — who threw one pass the entire game — powered in for a touchdown on fourth-and-goal from inside the 1.

UCF reached the red zone on its second and third drives, but Navy stuffed the Knights and forced them to settle for 21- and 31-yard field goals by Colton Boomer.

After the second field goal cut it to 7-6, the Midshipmen responded with a 13-play, 84-yard drive that ate up 6:47 of clock. Vincent Terrell Jr. ran around the left end for an 8-yard touchdown with 1:33 before halftime. Terrell finished with 41 yards on eight carries.

Plumlee was intercepted by Mbiti Williams Jr. on a Hail Mary bomb short of the end zone on the last play of the half, keeping it 14-6 Navy.

Keene came on to open the second half and guided the Knights 75 yards in five plays, tossing a 28-yard touchdown to Baker just 1:35 into the third quarter. Plumlee came in for the two-point conversion and connected with Baker to tie the game.

But on UCF’s next possession, Marshall strip-sacked Keene and Colin Ramos recovered for Navy at UCF’s 34-yard line. Four plays later, the Midshipmen went back ahead on a 45-yard field goal by Bijan Nichols.

Keene led another Knights drive in the fourth quarter, but on fourth-and-4 at Navy’s 43, his pass was broken up as Williams nearly grabbed his second pick of the game.