Nationals use 6-run fourth inning to avoid sweep to Brewers 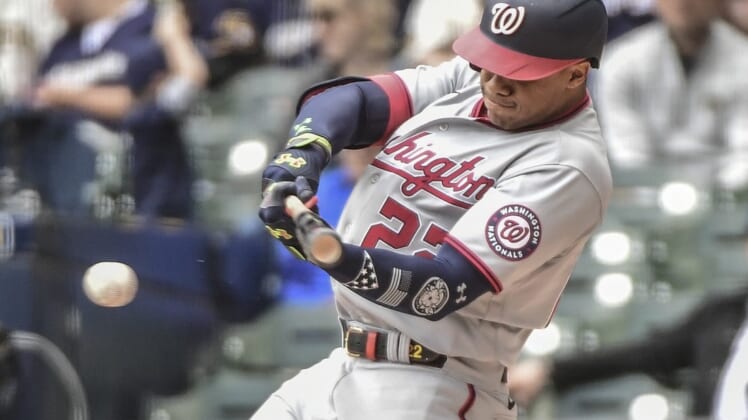 Aaron Sanchez tossed five effective innings and the Washington Nationals finally found some offense to avoid a sweep with an 8-2 victory Sunday over the Milwaukee Brewers.

Milwaukee saw starter Freddy Peralta exit with what the team said was right shoulder tightness. Peralta (3-2) came out after allowing three consecutive hits to start the fourth inning, when the Nationals broke the game open with six runs for an 8-0 lead.

Sanchez (3-3), who entered with a 7.94 ERA, allowed two runs on seven hits in five innings, striking out one and walking two. He was aided by three double plays. Josh Rogers, Steve Cishek, Kyle Finnegan and Tanner Rainey combined for four scoreless innings.

Washington, which had scored just one run in dropping the first two games of the series, opened the fourth with eight consecutive hits. Yadiel Hernandez and Maikel Franco singled and Lane Thomas followed with his second RBI double of the game to make it 3-0.

Brent Suter relieved Peralta and Dee Strange-Gordon and Cesar Hernandez laid down consecutive RBI bunt singles. Keibert Ruiz added an RBI double and Juan Soto a two-run single to make it 8-0 before anyone was out.

Milwaukee scored two in the fifth on a solo homer by Tyrone Taylor, his third, and Andrew McCutchen’s bases-loaded groundout.

Peralta, who tossed seven scoreless innings in his last start, allowed five runs on six hits, striking out two and walking one.

The Nationals capitalized on defensive miscues for a run in the second. Franco rolled a two-out single up the middle that eluded Mike Brosseau, making his first career start at short. Right fielder Hunter Renfroe then misplayed Thomas’ fly ball for an RBI double to give Washington its first lead of the series.

Washington made it 2-0 in the third when Cesar Hernandez singled to open, advanced on a ground out and came home on Nelson Cruz’s single to right.