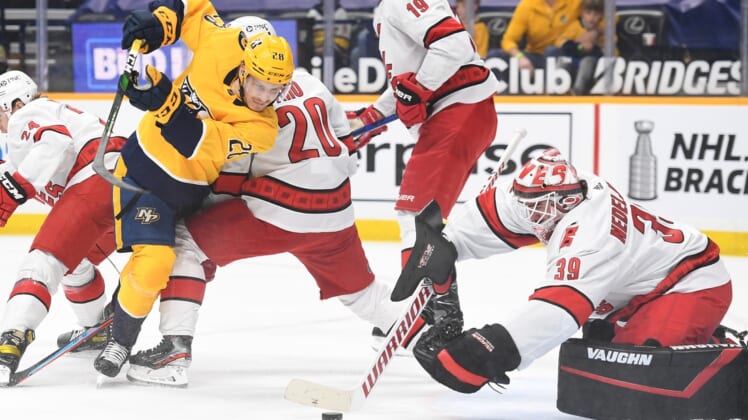 Goalie Juuse Saros made 21 saves and held a shutout into the third period in what was a preview of a first-round postseason series. The teams conclude the regular season with a rematch Monday night in Nashville.

Kunin scored in the second and third periods for a 2-0 Predators lead. Mikael Granlund assisted on both goals.

After the Hurricanes got within 2-1, Erik Haula, a former Carolina player, wrapped up the result with an empty-net goal with 1:03 remaining. The Predators (30-23-2, 62 points) won for the third time in their past four games.

It was the first time in seven meetings this season that the Predators defeated the Hurricanes.

A day earlier, the Hurricanes clinched the top seed in the Central Division when the Tampa Bay Lightning lost to the Dallas Stars.

Carolina goalie Alex Nedeljkovic made 27 saves. He took a loss in regulation for the first time in his last nine outings, and his season record dropped to 15-5-3.

The Hurricanes lost defenseman Jaccob Slavin to a lower-body injury in the first period. He played slightly more than seven minutes.

Kunin has 10 goals this season, with Saturday marking his first multi-goal effort of the season.

Geekie’s third goal of the year was set up by a pass from Steven Lorentz.

The Hurricanes had won 13 of their previous 14 games against Nashville prior to Saturday night’s result.

The Predators went 0-for-3 on power plays. They also had a successful penalty kill on Carolina’s lone situation with a man advantage.