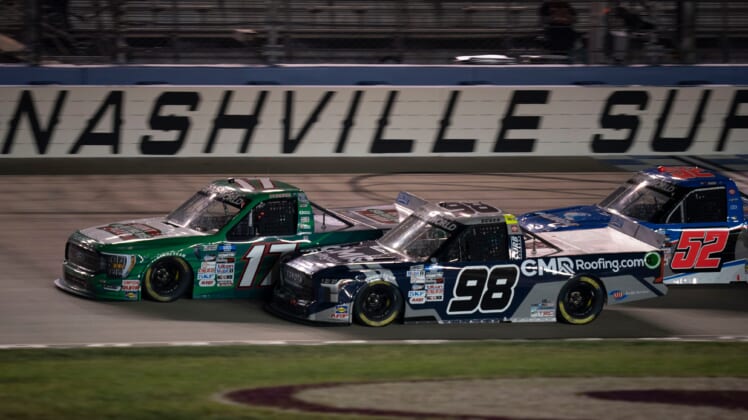 NASCAR silly season has not been as active as usual but things should start rolling into action sometime during the summer as teams solidify their rosters for the future.

Let’s dive into the official silly season predictions for the NASCAR Truck Series.

Let’s start off the predictions with Team Stange Racing. The organization was scheduled to run the Truck Series event at Sonoma Raceway but did not end up entering a truck.

However, they will run a limited schedule next season with Tsaro Marques. Meanwhile, NEMCO Motorsports will enter Joe Nemechek in the No. 8 truck for the Daytona event only.

Norm Benning Racing will participate in the dirt events at Bristol Dirt and Knoxville next season which is the same as this season. Norm Benning will pilot the No. 6 truck.

Jennifer Jo Cobb Racing will run in select races with which is the same as Atwell Racing, Cook Racing, and Trey Hutchens Racing.

The main part-time organization will be Henderson Motorsports as Parker Kligerman pilots the No. 75 truck for the majority of the 2023 season.

Jordan Anderson Racing and On Point Motorsports will both return on a full-time basis; however, neither will see a single full-time driver pilot their entries. Multiple drivers will be entered throughout the season.

Bret Holmes Racing will also field a full-time truck but it will not be a single driver. They will pull drivers from the ARCA Menards Series and give other drivers an opportunity in the No. 32 truck.

CR7 Motorsports fields Blaine Perkins but will not bring him back after struggling this season. Many drivers will split the No. 9 truck on a full-time basis.

Matt Dibenedetto and Rackley W.A.R. will continue their partnership as Dibenedetto has impressed in the No. 25 truck. It makes sense for both parties to continue moving forward.

Finally, Zane Smith will return to Front Row Motorsports for a final Truck Series season before moving up to either the Xfinity Series or Cup Series for the 2024 NASCAR season.

G2G Racing will continue running two trucks but one of them will be on a part-time basis. The No. 46 truck will be the main truck with the No. 47 being the part-time vehicle.

Reaume Brothers Racing will also continue running two full-time trucks as they give drivers opportunities to prove their worth in the Truck Series.

Timmy Hill will return to the No. 56 truck for Hill Motorsports while Tyler Hill pilots the No. 5 truck on a full-time basis instead of his part-time efforts during the 2022 NASCAR season.

AM Racing will field two full-time entries with Austin Wayne Self in the No. 22 truck and Max Gutiérrez in the No. 37 truck after his impressive run at Nashville Superspeedway this season.

Hattori Racing Enterprises will run it back with Tyler Ankrum in the No. 16 truck and Chase Purdy in the No. 61 truck as they look to improve on their performances from the 2022 NASCAR season.

Halmar Friesen Racing will continue its current structure with Stewart Friesen in the No. 52 truck and multiple drivers running the No. 62 truck on a part-time basis.

Grant Enfinger returns to the No. 23 truck while Daniel Dye replaces Jack Wood who is the current driver of the No. 24 truck. Dye currently runs full-time in the ARCA Menards Series.

David Gilliland Racing will see Hailie Deegan and Tanner Gray return to their respective rides for the 2022 NASCAR season. However, the organization will have a third full-time truck.

Taylor Gray will make the jump from the ARCA Menards Series and pilot the No. 17 truck on a full-time basis after his part-time efforts this season.

Young’s Motorsports will continue the current structure of its organization and run multiple drivers in the No. 02 and No. 20 trucks while Spencer Boyd continues to drive the No. 12 truck.

McAnally-Hilgemann Racing will bring back Derek Kraus, even though he picks up some Xfinity Series starts, and Colby Howard as he is on a multi-year contract. Jake Garcia will be in a third part-time truck for the organization.

Corey Heim will move to the No. 4 truck as Chandler Smith returns to the No. 18 truck for Kyle Busch Motorsports. Multiple drivers make starts in the No. 51 truck, including Buddy Kofoid who gets a larger schedule.

ThorSport Racing has seen impressive drives from many of its drivers this season and that will provide confidence to run back the same lineup in 2023.

Ty Majeski, Matt Crafton, Christian Eckes, and defending champion Ben Rhodes will all return to their respective rides. Crafton is 46 years old and retirement could be a possible idea soon, if not next season.

Niece Motorsports expanded its team to four full-time trucks with a fifth part-time truck for the 2022 season and it has been paying off well lately.

Dean Thompson, Carson Hocevar, Kris Wright, and Lawless Alan will all return for another year in their respective rides. Hocevar is the most notable driver in the lineup. Meanwhile, Ross Chastain and others will continue to pilot the part-time No. 41 truck in 2023.

The 2022 NASCAR Truck Series silly season has the potential to be as big as every other year. There is potential for movement in almost every organization and it could provide some drama.

The Truck Series will likely see the most movement of any series as the Cup Series will not have as many moves as in previous years and the Xfinity Series continues as usual.

Either way, the entire silly season process will be fun to watch and there are going to be unexpected moves from drivers and teams that may not have been expected.