Every great college football team has at least one player who is irreplaceable.

Without these guys in the lineup on a weekly basis, there is no way they’d be able to continue rattling off wins on their way to a potential College Football Playoff berth.

Yes, it takes a team effort to win the ultimate prize, but there is always a ring-leader who inspires them all.

These are the most valuable players for each of the top 10 playoff hopefuls heading into Week 12. Not surprisingly, some of these men are high up on the list for the 2015 Heisman Trophy.

Without some timely contributions from sophomore quarterback Watson, Clemson would certainly not be undefeated and No. 1 in the nation heading down the home stretch. Whenever the Tigers have needed a big play, Watson has found a way to make it, both through the air and on the ground.

Remarkably, in his first full year as the starter Watson has completed more than 70 percent of his passes and has limited his turnovers like a veteran (just eight interceptions). With 23 passing scores and five more on the ground, he’s the catalyst for Clemson’s high-powered offense.

Defenses must pick their poison trying to defend the Tigers, because Watson’s deep ball rivals the best in the nation, and he can gain big chunks on the ground if defenses get too devoted to stopping the pass.

If Clemson’s remarkable 2015 campaign is going to end on a happy note, then Watson is going to have everything to do with it. 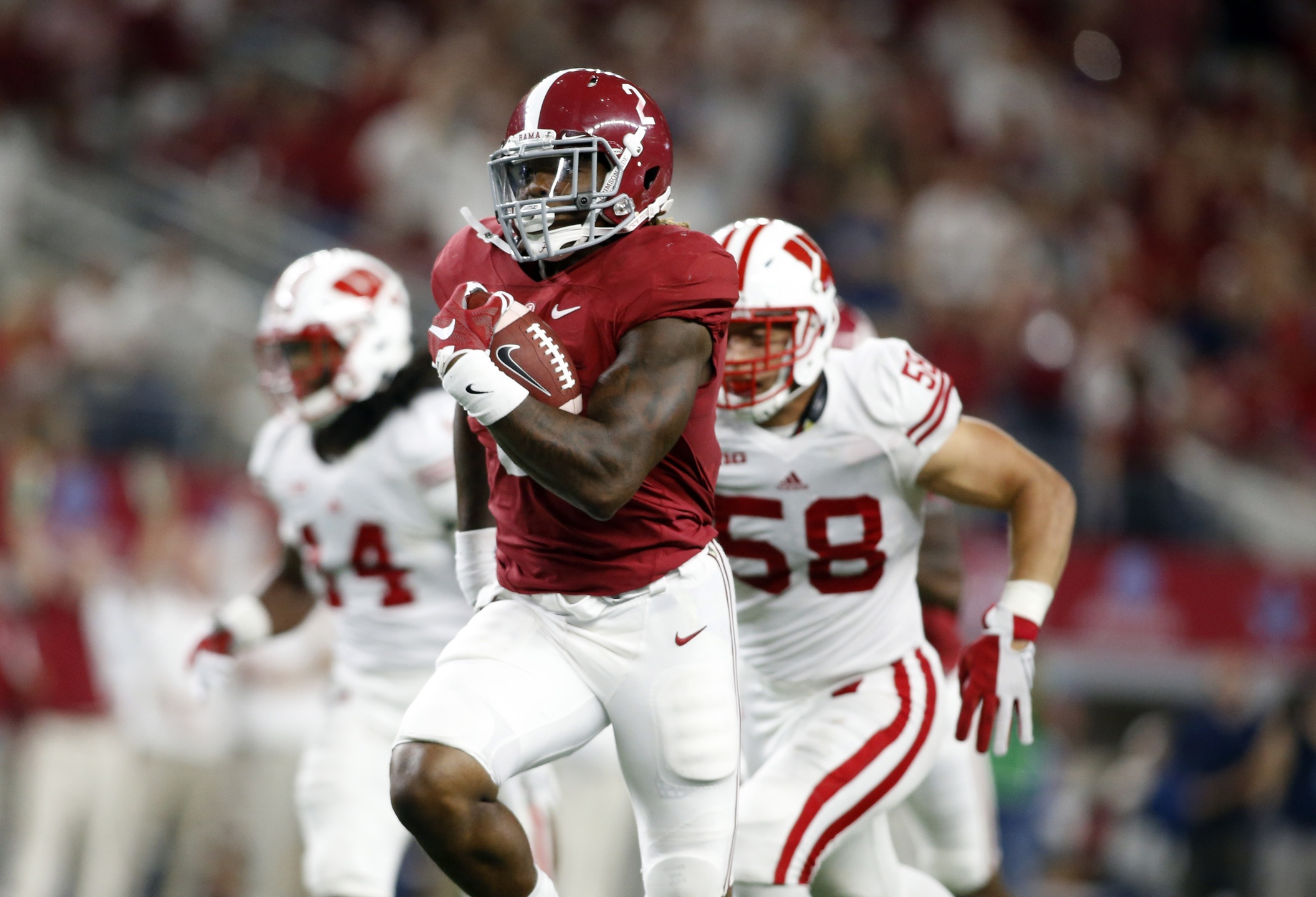 Quarterback Jake Coker isn’t equipped to pick up the slack, being no better than mediocre, and Kenyan Drake is currently out with a broken arm. As good as this team is on defense, it’s hard to imagine where it would be without Henry’s 19 rushing scores.

In addition to his 19 rushing touchdowns, Henry is No. 2 in the nation with 1,458 yards on the ground. He’s ripped off monstrous gains of 40 or more yards in three of his last four games and has been phenomenal against the some of the toughest run defenses in the nation. At this point, the 2015 Heisman Trophy is Henry’s to lose.

Ohio State is going to need Elliott to come through with a couple signature performances the next couple of weeks against Michigan State and Michigan. After playing inferior opponents all year long, the extended exhibition season is over for the Buckeyes, who will prove pretender or legitimate contender the next few weeks.

With 16 rushing scores, Elliott has matched the scoring production of the entire Buckeyes’ passing game, and he has been leaned upon heavily this year as the team’s two quarterbacks have been shuffled into and out of the lineup.

Last weekend against a surprisingly tough Illinois team he took the game over in the second half, rushing for 126 yards and a touchdown. It was the 15th game in a row in which Elliott had rushed for at least 100 yards in a game, which is the longest streak in the nation.

Notre Dame’s defense is great, and the running game has been phenomenal this year, no matter who coach Brian Kelly throws in there to run behind the team’s outstanding offensive line. DeShone Kizer has also come through in the clutch on a few occasions this year, but the Irish would not have a chance to win a title this year without Fuller’s production in the passing game.

Utilizing elite speed and quickness, Fuller has consistently found ways to get behind defensive backs for huge plays down the field. He’s averaging darn-near 20 yards per catch and has 12 of the team’s 20 receiving touchdowns this year — five of which have come in the second half of games.

Fuller was frustrated last weekend against Wake Forest, which held the Irish to just 111 yards passing all game long. After catching just three passes for 37 yards and no touchdowns, he’ll be eager to exact some revenge against Boston College in Week 12.

The outstanding play of cornerback Desmond King — recently named to the Walter Camp Player of the Year Watch List — is one of the biggest reasons Iowa remains undefeated this year.

With eight interceptions, seven pass deflections and a touchdown to his name, King is one of the most impactful defenders in the nation. In addition to his exploits as a cover man, King is a physical corner who is a key cog in Iowa’s No. 9-ranked run defense that allows just 3.2 yards per carry and just six total rushing scores in 2015.

College football fans who haven’t seen Oklahoma State play are missing out on one of the best overall pass-rushers in the nation in Ogbah, who has racked up 11 sacks already this year to become the NCAA’s active sacks leader, with 26 total.

The junior defensive end has NFL scouts drooling, coming in at 6-foot-4 and 275 pounds and possessing the raw athleticism to dominate at the next level.

“Someday, whenever that may be, this year or next year, somebody’s going to get a big-time player,” Cowboys head coach Mike Gundy said recently (h/t ncaa.com). “They’re going to be glad they have him on the roster.”

The native Nigerian is a converted soccer player who is still getting his feet wet in the sport of American football. Needless to say, he’s making quite the impression. He leads one of the nation’s most impressive pass-rushing defenses, as Oklahoma State has downed opposing quarterbacks 35 times this year.

Though not one of the big names you hear national media mention when discussing the Heisman for 2015, Mayfield deserves a bit of consideration to be one of the finalists for the coveted award.

With 3,082 yards passing, another 301 yards on the ground and 37 total touchdowns, Mayfield has performed almost flawlessly for the Sooners this year. With only five interceptions all year, the former walk-on rarely hurts his team and is the main reason the program is being considered as a strong contender for the four-team playoff.

Florida is such an interesting team. Without any real superstar to lead the way, rookie head coach Jim McElwain has gotten his team to buy into his program and the players have come together as one.

However, if you take away Taylor’s 12 rushing scores, then you’d be looking at a team nowhere near the top of the rankings. Florida struggles to put points on the board, averaging 28 points per game (No. 67 in the nation). On such an offense-depleted team, his consistent contribution — at least one touchdown in every game this year but one — has been the engine that has driven the Gators towards success. 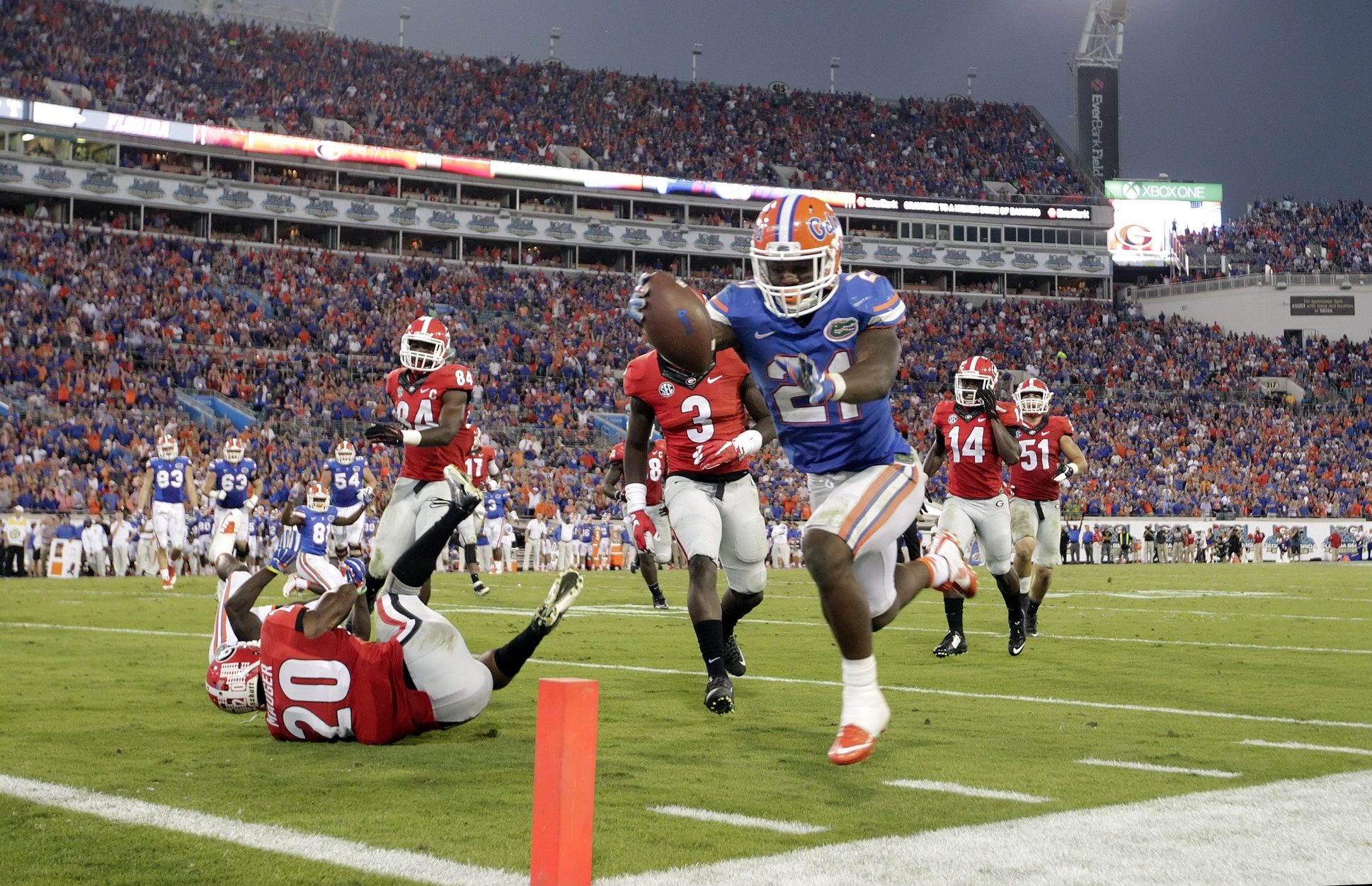 Taylor isn’t satisfied with his level of play, however, and is striving to finish the season on an upward trajectory.

“I really try not to look at the stats,” Taylor said (h/t gatorsports.com). I just try to go out there every Saturday and just help my team win. But I feel like I can do a whole lot better just with me as a player and helping my teammates win. I feel like I have to pick up my play a little more just to make our offense more explosive.”

To be fair, he’s not wrong. Florida will need to be more explosive offensively to finish the season with just the one loss in the SEC, which would almost certainly get the Gators into the playoff.

Cook has continued to grow as a quarterback and leader for Michigan State in this, his senior year. Though not a prolific passer, he has shown an ability to drive the ball to all areas of the field and has been extremely careful with the football, which has been critical to the team’s success.

With 2,482 passing yards, 21 touchdowns and just four interceptions, Cook has been the most important player on offense for the Spartans this year. And, if not for a horribly missed call by the referees against Nebraska, Michigan State would still be undefeated.

Cook brings a sore shoulder into Week 12, which is the pivotal contest against Ohio State. Should he successfully lead the Spartans to victory on the road in Columbus this Saturday night, then the Spartans will be right back in the thick of it to make one of the four playoff spots.

In truth, Seth Russell was the MVP of this team, but his star faded early with a scary neck injury. With Russell out of the equation, the honor must fall to Coleman, who has caught 20 touchdown passes this year — six more than the next-best receiver in the nation.

Coleman has NFL-ready moves and size (5-foot-11 and 190 pounds), and he goes up to get balls at the highest point better than any receiver in the nation. His statistics speak for themselves: 61 catches for 1,229 yards and 20 touchdowns. It’s not an accident that the only game this year in which he didn’t catch a touchdown pass is also the only game Baylor has lost this season.

Baylor WR Corey Coleman is on pace to break the FBS record for TD Rec, a route that hasn’t come without obstacles. https://t.co/aQP4vfvaBN

Before Russell’s season-ending neck injury, Coleman was on pace to smash the all-time single-season touchdown mark of 27, set by Troy Edwards out of Louisiana Tech in 1998. With just two in his next two games (including the goose egg in Week 11), he has some work ahead of him to get back on track for this elusive record.