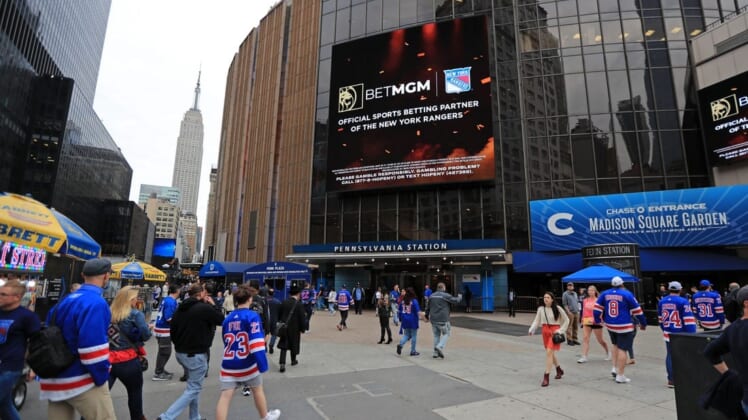 Madison Square Garden has issued a lifetime ban to a Rangers fan after he was caught on video punching a Tampa Bay Lightning supporter in the face following Game 5 of the Eastern Conference finals in New York.

Per a viral video posted on social media, the Rangers fan turned and punched the Lightning supporter as they were walking through the concourse after Tampa Bay’s 3-1 win on Thursday. MSG issued a statement on Friday that said a second assault followed against another individual who attempted to intervene.

“Last night, an abhorrent assault took place against a Tampa Bay fan at the conclusion of the game — followed by a second assault against an individual who bravely intervened,” a statement from Madison Square Garden read.

“First, we ensure the victims received appropriate medical care and have followed up to provide support from our guest services team. Equally important, we are cooperating fully with law enforcement as this is now a criminal matter. The assailant will also be banned from The Garden and all other MSG venues for life.

“All guests — no matter what team they support — should feel safe and respected in The Garden. This has and always will be our policy.”

Multiple media outlets reported that a 29-year-old man from Staten Island, N.Y., was arrested and charged with two counts of assault, disorderly conduct and harassment.

The Lightning own a 3-2 lead in the best-of-seven series. They can advance to the Stanley Cup Final for the third straight season with a win in Game 6 on Saturday in Tampa, Fla. Game 7 would be held in New York on Tuesday, if needed.